Pork belly and bacon are both delectable parts of pork and used in so many recipes, but how are they different? Knowing their characteristics can be of great help when cooking, regardless if you’re trying to substitute one for the other or adding extra flavor to a recipe.

Bacon is most of the time derived from pork belly, although it can come from other animals such as lamb, turkey, and chicken.

Pork belly has a straightforward name and yes, it always comes from pork.

Are you feeling confused? Keep reading to find out their unique attributes and the qualities they provide for cooking so you can always choose the right one for your needs!

What Is Pork Belly?

Whole pork belly is a brick-shaped cut of meat that comes from the belly of the swine. It has layers of meat and fat, as well as some marbling, making it as tasty as calorie-dense.

Braising is one of the most popular techniques used for cooking pork belly, as Chinese cuisine can show. It also turns out delicious when deep-fried, grilled, or roasted.

You can find it for sale cut in inch-thick strips or as large slabs. It’s used in various recipes, along with veggies and pasta.

Pork belly is undeniably a super-fatty cut of pork, but you don’t need to worry about it containing dangerous preservatives or other chemicals as it’s uncured.

In most cases, bacon comes from pork belly that was cured, smoked and cut in thin slices. Hickory and applewood are the most commonly used types of wood for smoking bacon.

It can come from other parts of the pork or even from other animals. If such is the case, you should have this information on the label.

The curing process takes about 5-7 days for pork belly. Then, bacon is dried up to one day and finally goes through the smoking process.

Despite the curing, bacon still needs to be cooked before eating for safety purposes.

The fat that remains after cooking bacon is called lard. It has a great flavor, and it’s used in various recipes, even salad dressings and sauces.

Not all bacon is created equal, although all types have their own appeal and I encourage you to try them all!

Here are the essential bacon varieties you need to know about:

Also known as side bacon, American bacon, or belly bacon, this type of bacon is rich in fat and is typically cured and smoked.

The thinly sliced variation can become incredibly crispy when cooked. The crunchy texture goes well alongside eggs, in salads, burgers, sandwiches, and many other dishes.

For thin slices, it’s easy to over or undercook bacon and that can ruin its texture or even pose a health risk. It’s actually pretty easy to tell when bacon is done and it can be done regardless if you like it crispy or slightly chewy.

If there’s no English bacon, it’s not a classic British breakfast. Unlike the American counterpart, this bacon comes from the loin area and has a significantly lower fat content.

English bacon is cured but not smoked and the British call it rasher.

Served as oval slices, this bacon is extremely meaty and usually comes from the back of the swine.

It’s not always smoked and has a very low fat content compared to pork belly. It’s perfect if you are trying to add extra protein to your meals.

Made from lean pork legs which is the same cut used for ham, speck is cured using a unique mix of spices. This blend usually includes pepper, rosemary, bay leaf, juniper berries, and cumin, among others.

It’s cured in cold rooms for up to three weeks and goes through several light cold smoking sessions.

This Italian delicacy has origins in the Tyrol area and after smoking, it’s further cured for about 22 weeks.

Speck is used in many recipes, including pasta, but its intense flavor is best appreciated when consumed as is, alongside wine, cheese, and pickles.

Made from the back of the pig, cured, and not smoked, Irish bacon shares some similarities with Canadian and English bacon.

Served as circular slices it has a higher fat content than the Canadian counterpart.

Unlike Americans, the Irish rarely fry their bacon. For the exceptions, it’s cooked only until done, and not to a crisp.

Other than that, you can use it the same as streaky bacon in a variety of recipes such as sandwiches, burgers, pasta, omelets, salads, for breakfast, or even lunch.

This Italian specialty bacon is cured but not smoked and can be served both raw and cooked.

You will find it for sale as slices or cubes and it has a salty taste similar to the American bacon but without the smokiness.

They make pancetta from pork belly and the curing process takes about three weeks.

It’s a key ingredient in pasta carbonara and thanks to the high fat content, it has a very silky texture.

Whole smoked pork belly is what we know as slab bacon. You get the benefit of slicing it as thin as needed, but you can also cut it into cubes.

There’s no particular way of making slab bacon so it can be a combination of smoking, curing, and/or aging.

This means you can find a variety of flavors and textures so there’s lots of room for experimenting.

If you have a smoker, you can even make homemade slab bacon and experiment with different spices and flavors when curing it.

This is a variety of bacon that comes from French cuisine. Lardons are small cubes of bacon, typically unsmoked and rich in salt.

You’ll find them in various French recipes such as Quiche Lorraine and coq au vin, but they are also fantastic in soups, stews, pasta, and even as a pizza topping!

Grocery stores usually sell these fatty cubes in vacuum packs. If you can’t find any, just purchase some slab bacon and cut it into 1/4-inch pieces.

The cheek area of the pig gives us the tasty jowl bacon, also called “hog jowl” by Southerners.

Like streaky bacon, jowl bacon also goes through a curing and smoking process. It’s great when fried, served for breakfast, in a sandwich, or with a veggie-based side dish.

Yes, there are some types of bacon that come from other animals. Appearance-wise beef bacon seems to be closest to the real thing.

In reality, the flavor resembles steak rather than traditional pork bacon, but it still makes an excellent choice for sandwiches.

You may also find duck, turkey, salmon, lamb, and even plant-based bacon.

Despite the marketing, expect non-pork bacon varieties to have a completely different flavor and texture compared to the original.

Now that we discussed some of the most popular types of bacon, you already know it usually comes from pork belly, but not always.

Of course, there are other differences between pork belly and bacon, so here are the most important ones:

Most of the times, bacon is cured, which basically means its preserved with salt and nitrates.

The curing process takes time and eliminates some of the water raw meat contains.

Various kinds of bacon are enhanced with a mix of spices which adds up to their cost.

We have bacon varieties that are also smoked, further increasing the processing time needed for the finished product.

Pork belly is sold raw, so it takes a lot less time to make it which also reflects in its price.

Curing and smoking give bacon a completely different flavor than pork belly.

Cured bacon will taste salty, and if such is the case, it will also have a smoky flavor.

Other factors that impact flavor are the spices, the cut of the pig used, and the meat to fat ratio.

Bacon usually comes in thin slices or small cubes, and both are suitable for frying to a crisp. Its crispiness makes a wonderful addition to burgers, sandwiches, soups, and salads.

Pork belly can be prepared using various cooking methods such as slow cooking, oven roasting, braising, and even smoking.

It has a softer texture compared to bacon and you can add it to various dishes but also as a meat entrée.

Bacon sure tastes good, although it should be consumed occasionally and sparingly. You can balance its high salt content by reducing the salt in your recipe or accompanying side dish.

Bacon often has other additives to enhance flavor and those are usually not healthy.

Pork belly is sold raw and uncured, which means you are the one responsible for adding flavors and it doesn’t contain any harmful additives.

Can You Use Pork Belly Instead Of Bacon?

Many recipes will allow you to substitute pork belly for bacon. You can even cut pork belly into thin slices and fry it to get a crispy texture.

The salt content is one key difference and if you use pork belly instead of bacon, you might need to add more salt to your recipe.

Can’t find pork belly at the grocery store? Try one of these excellent pork belly substitutes!

When To Use Pork Belly vs. Bacon?

Not much effort is needed to make bacon taste great. You can just pan fry it and eat it next to some eggs, put it on top of a sandwich, or crumble it into a soup.

Another thing bacon is great for is wrapping. You can use it to wrap veggies and lean meat for roasting and grilling to keep them moist while the outside becomes incredibly crispy.

It even works as a salty-sweet treat such as candied or chocolate-covered bacon.

Pork belly is quite versatile and used in many cuisines around the world since it can be cooked using various methods.

It’s a staple in Asian noodle dishes such as ramen and makes a wonderful addition to stews.

Are you trying to find some new recipes that will let you enjoy bacon? Me and my family are huge fans of bacon, so here are some of our favorites:

Pork belly has its own special appeal, and it’s worth experimenting with it. If you want to enjoy it in various ways, here are some amazing pork belly recipes, you can try at home:

Most of the times, bacon is cured, which basically means its preserved with salt and nitrates. The curing process takes time and eliminates some of the water raw meat contains. Various kinds of bacon are enhanced with a mix of spices which adds up to their cost. Pork belly is sold raw and uncured, which means you are the one responsible for adding flavors and it doesn’t contain any harmful additives.

Where does bacon come from?

They come from the belly of the pig if referring to bacon in the US, UK and Italy. Irish and Canadian bacon will come from the loin area.

What is bacon made out of?

In the US, Italy and the UK, it is made from pork belly that is cured with spices and preserved using salt and nitrates. Canadian bacon comes from the pork loin that is cured, smoked and fully cooked.

Pork belly and bacon might not be the same and that doesn’t mean you can’t enjoy both.

With so many types of bacon being available, chances are you’ll never get bored with it!

Pork belly’s fatty consistency will add flavor to your dishes and when cooked properly, it gets a soft and tender texture that will simply melt in your mouth. Bon appétit! 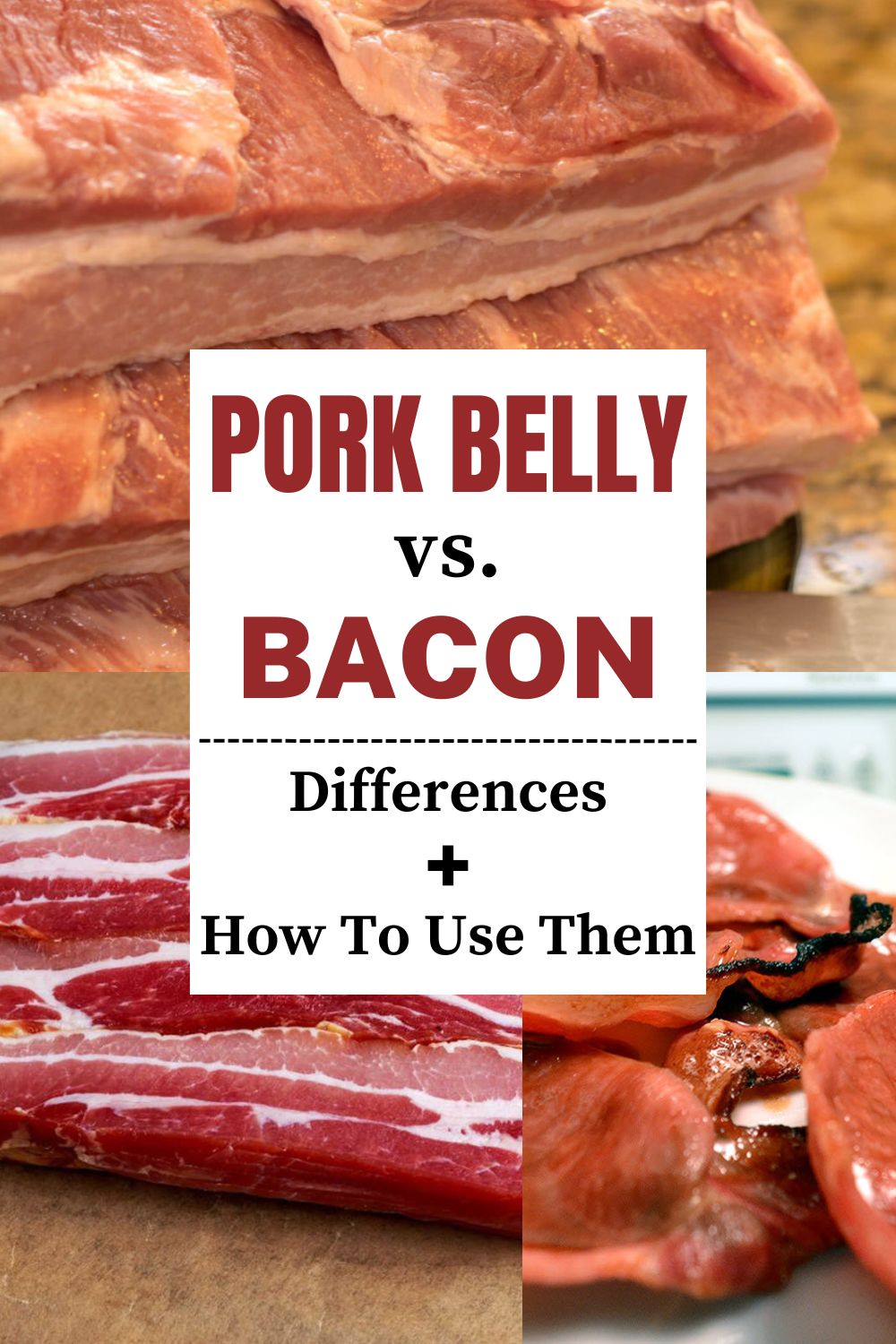 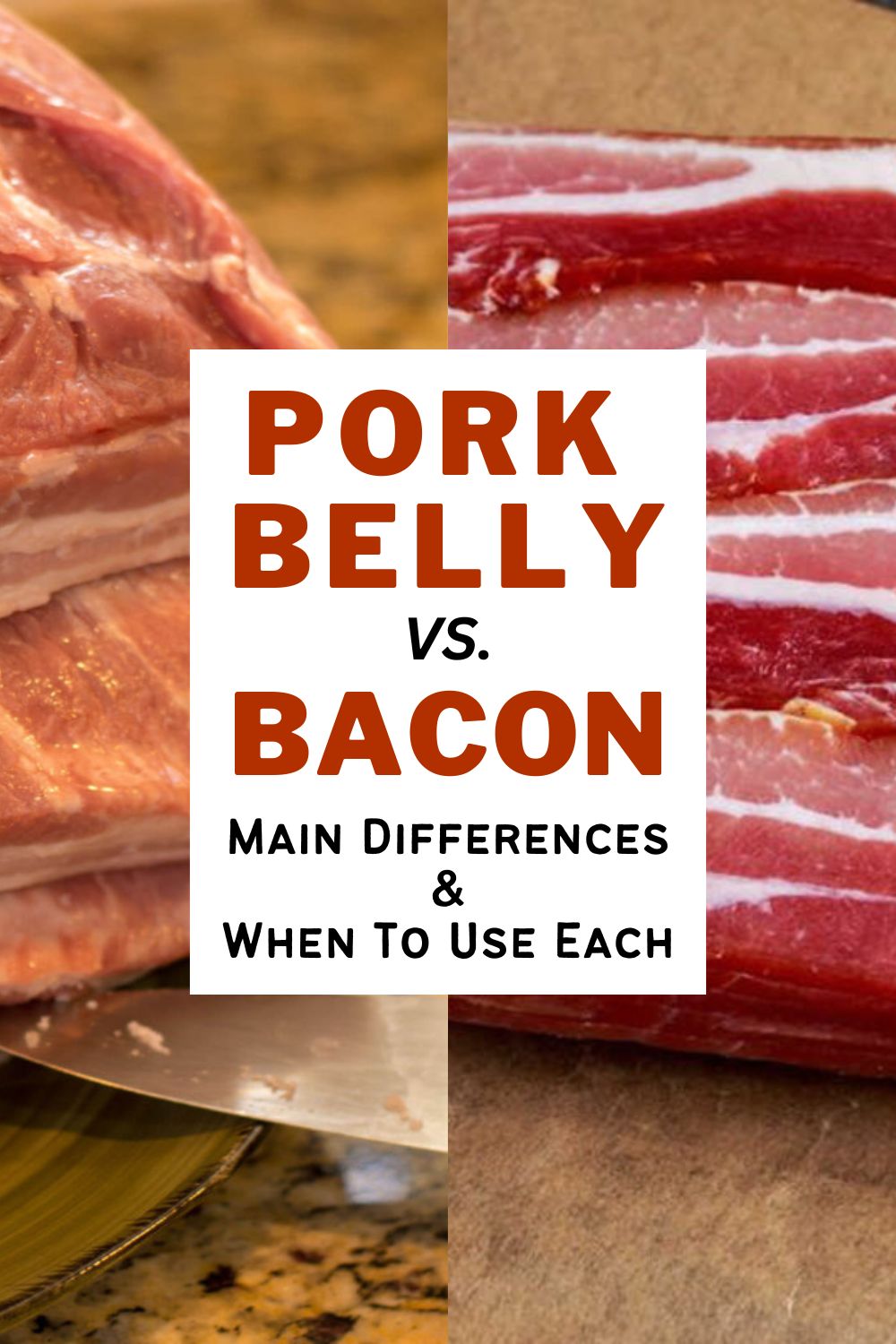