Grilled Twisted Bacon is an ingenious TikTok viral video that is a no-brainer to adapt for the grill! This is a super simple recipe that will change the way you prepare bacon for those weekend mornings or serve these up for a creative addition for game day treats!

These hot bacon strips are so crazy popular right now and you have to stop what you are doing and give them a try! They are so silly easy but they jazz up a breakfast spread of Grilled Breakfast Casserole and Grilled Apple Pie Cinnamon Roll Cups. We actually started making them for game days with friends and served with containers of veggies to offset the heavy weight bacon. It was a HUGE hit as everyone could just take one from the jar along with carrots and celery sticks.

🍽️ Why We Love This Recipe

Saves Space – If you cook bacon the way I had been, by laying the strip flat and letting it cook in a skillet or on a baking sheet, then this recipe is for you! Twisting the bacon into tight spirals lets you add a LOT more bacon to the pan and you’ll spend less time preparing it. I was able to get 2-3 times as many slices in the pan as I had in the past!

Perfect for the Grill – Cooking bacon inside leads to a greasy mess. I even use the splatter guard on the stovetop, but I still end up with a lot to clean up. Cooking these on the grill saves a lot of mess!

Three Ingredients – You season your bacon before cooking, right? Right? If not, you’re missing out! This is a simple three-ingredient recipe that adds so much flavor to an already delicious treat. Heck, you can make this ONE ingredient, if you want to. Leave off the extra sugar/spice for plain versions that never fail.

Needs No Attention to Grill – This is a recipe that you can make for the family and put it on the grill, go start other parts of the breakfast feast, come back and check it. It really is a great hands off recipe that allows you to not have to babysit it.

Silly Easy | Everyone Can Do This – When you are looking for a quick and easy recipe that seriously everyone can grill up, this one is for you! Hold the bacon in one hand and twist before putting on the baking rack/sheet pan. Season it or not, it’s really that simple.

Bacon – Use thinly sliced bacon for this recipe. Thin slices twist better and stick together more easily that the thick slices.

Brown Sugar – Sprinkle a bit over the bacon for an unbelievable sweet flavoring that will make this so addicting! You don’t need much!

Chili Powder – Add some heat to offset the sweet. This chili powder isn’t spicy hot, but does offer a capsicum flavoring that works well with the bacon. For a bit more spiciness, replace this with red pepper flakes.

Step One: Mix the brown sugar and chili powder together in a small bowl.

Step Two: Trim the fat off of the ends of the bacon. The fat will shrink at a different rate than the meat in the bacon, and if it is at the end of the spiral, it may unravel easier.

Step Three: Hold a slice of bacon at each end and twist it up. Make it nice and tight. Lay the spirals on your lined sheet pan.

Step Four: Sprinkle a little bit of the brown sugar and chili seasoning on the bacon.

Step Five: Grill at 350 degrees on direct heat for about 30 minutes. Make sure to turn these over every 5-10 minutes to avoid burning as we talk about in How to Tell When Bacon is Done?

Note: The first time I cooked these, I did not turn them over in the cast iron skillet quickly enough and they burned. I think the sugar accelerated the burning, as I didn’t think I left them alone long enough to worry. Stay close by the grill and closely monitor them.

After these cool, they will crisp up. I like to serve them with fresh veggies and a ranch dipping sauce. Don’t be afraid to dip the bacon in the ranch! It is oh-so good!

Use a Baking Rack – I tried this recipe a few times to test out different methods to grill the bacon. I lined a sheet pan with foil and laid the bacon in that. It worked, but the bacon unraveled more than I wanted. I think it is because the rendered fat heated up and the parts of the bacon that contacted it cooked at a different rate, causing it to unravel.

Use Parchment Paper – Line the sheet pan with a piece of parchment before you start this. As this is cooked on direct heat, it is possible that the grease and particles would burn on the pan, making cleanup a pain!

We added brown sugar and chili powder to the bacon and some will drip down. Look how easy it is just to lift up the parchment and remove most of the burned-on stuff!

Keep the temperature BELOW 370 as that is smoking point for bacon. Keep the grill temperature lower or the bacon will burn.

Another option is to cut the bacon in half to make it half as long and just make a couple twists.

Typically, a slice of bacon is close to one inch wide, which limits the amount you can add to your skillet without overlapping. When the bacon is twisted, it becomes about ¼” wide, which allows you to add a lot more to the skillet and cook a whole package more quickly. Don’t over twist as it does make it longer, which is counter intuitive.

How long does it take to cook?

It takes twisted bacon about 30 minutes to cook. Remember to turn it and watch it a bit to make sure it doesn’t burn.

How to grill bacon with no flare ups?

Using indirect heat and also using a sheet pan with baking rack to ensure that the bacon grease doesn’t drip onto the coals + fire is the big key here. If you haven’t tried indirect heating before, make sure to give this a quick read even if you aren’t using a Kamado grill.

How do I make the bacon softer?

Use the technique we tried of putting the bacon straight on the sheet pan with NO baking rack. This will allow the bacon to stay softer. 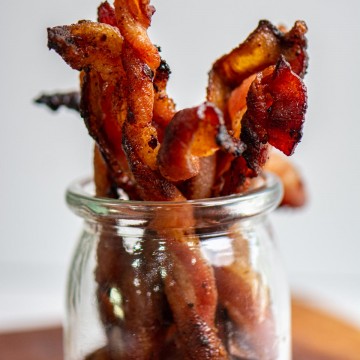 Hot Spots on Grill: Rotate location on grill: If there are hot spots on the grill, keep rotating the bacon so you don’t have burned bacon in some spots and under done bacon in other spots.  Pan Choice: Make sure the pan you use has a small lip as the bacon fat will render and you don’t want it to spill over onto the fire.  Bacon Choice: Using thin bacon allows you to twist the bacon tight. If you use thick bacon, it is much harder. If you use the thinnest bacon you can find, you can twist two pieces together.  Rub Choice: Feel free to use the rub of your choice or keep it plain for a ramped up addition to a breakfast feast from the grill.  Grill Temperature: Bacon fat smoke point is around 370 degrees, so using 350 degrees allows a great temperature to cook yet not burn.  Why Twist: Typically, a slice of bacon is close to one inch wide, which limits the amount you can add to your pan without overlapping. When the bacon is twisted, it becomes about ¼” wide, which allows you to add a lot more to the skillet and cook a whole package more quickly. Don’t over twist as it does make it longer, which is counter intuitive. Softer Bacon Choice: Use the technique we tried of putting the bacon straight on the sheet pan with NO baking rack. This will allow the bacon to stay softer. Preventing Grill Flare Ups: Using indirect heat and also using a sheet pan with baking rack to ensure that the bacon grease doesn’t drip onto the coals + fire is the big key here. If you haven’t tried indirect heating before, make sure to give this a quick read even if you aren’t using a Kamado grill. 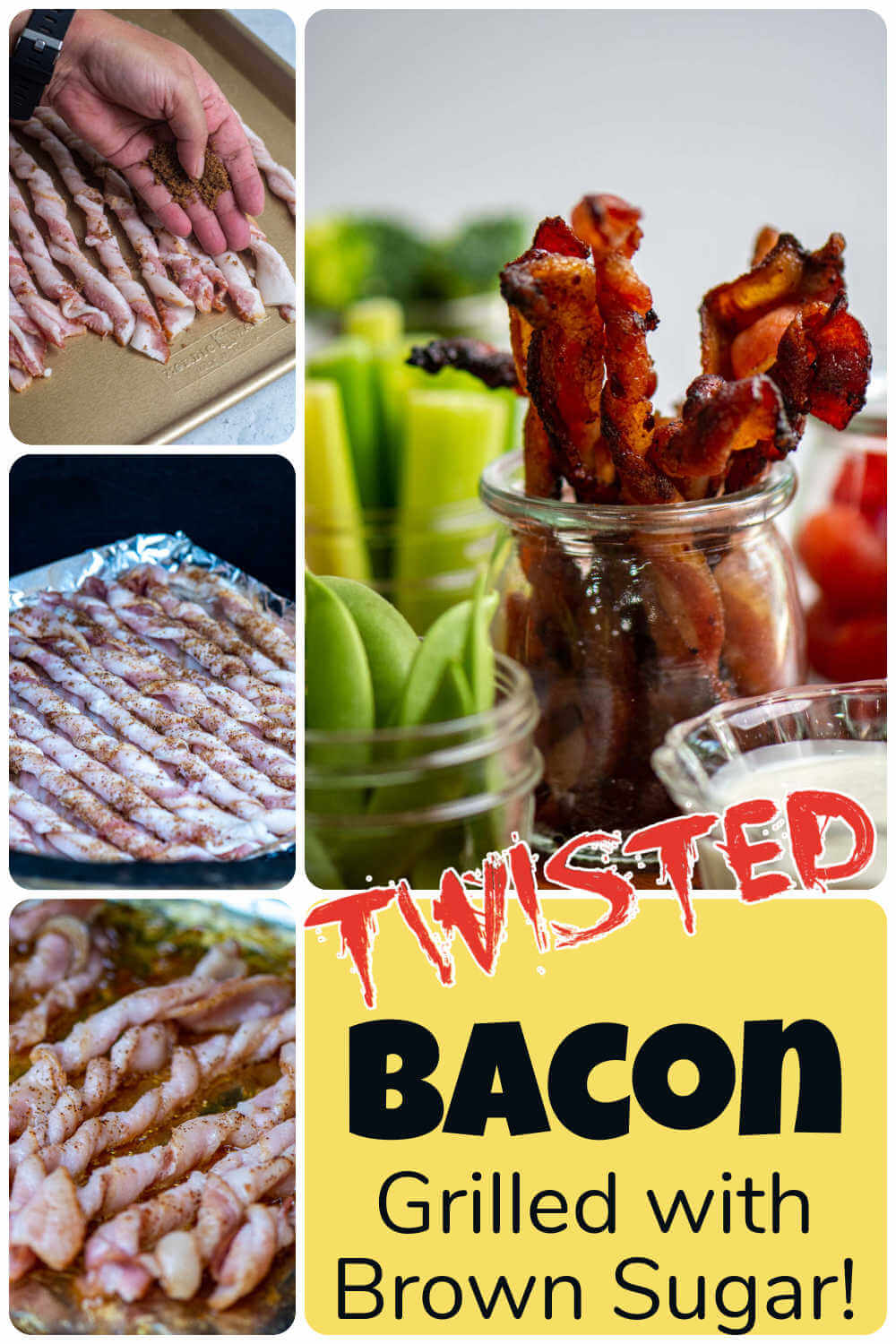 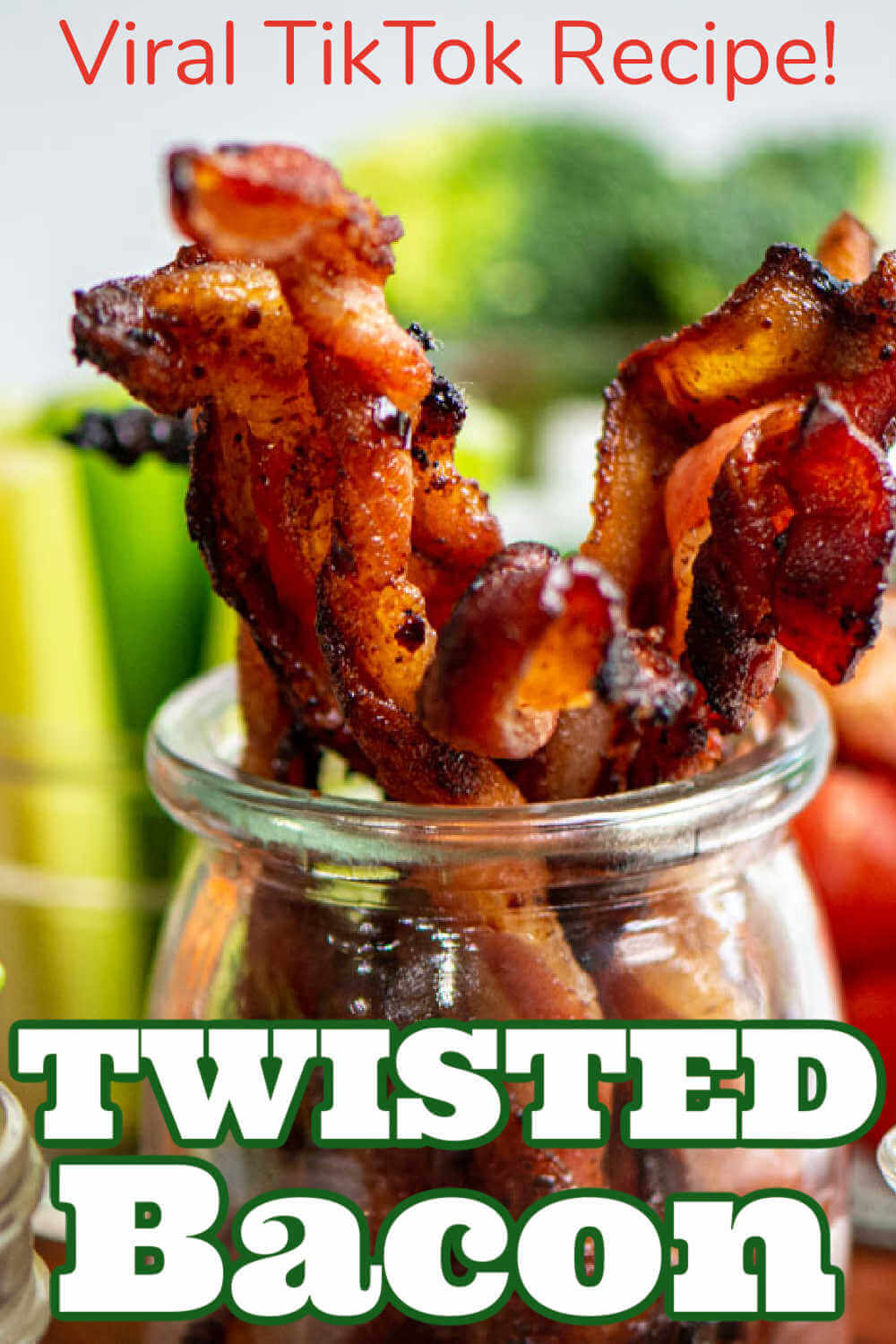