This Smoked Pork Tenderloin recipe is simple to make and you just can’t go wrong with wrapping it in bacon.  The three ingredient bourbon honey mustard glaze adds just the right amount of tanginess to the dish. Full disclosure, it is temping to just eat the bacon with the bourbon honey mustard glaze all on its own. That glaze ranks as one of my top five all time sauces.

Every now and then, we collect some fun meat from Costco.  My wife limits my time in the butcher’s shop there, otherwise I’d gather just about everything to throw on the grill.  This time she acquiesced and let me add some pork tenderloin to the cart! 😃

Why This Recipe Works

Quick and Easy Enough for Weeknights: Dinner is just so much more pleasant when you grill it, let’s face it. This is one quick and easy recipe that you can start to finish make in just over an hour.

Meal Prep Friendly: If you really want to make this a quick meal, meal prep 100% of it the morning of and you can fire up the grill and put this on as soon as it’s ready.

Leftover Friendly: Make an extra one as this one is a home run for lunches for the week or leftovers the next night when you don’t to cook.

Pork Tenderloin – Don’t confuse this with pork loin.  They are two different cuts of meat.  Pork tenderloin is usually found in vacuum packaging and is long and thin.  This is from the muscles along the spine of the pig and are the most tender cut of meat available.

Bacon – You will use about ¾ of a package of bacon.  I recommend thinly sliced versions, as they are much easier to weave around the pork and will crisp up nicely on the grill.

Dry Rub – Use a mild BBQ rub like DizzyPig’s Crossroads.  The flavor from the smoke, the bacon and the glaze work well together and you don’t want the rub to overpower the other flavors.  My wife even thought the meal would have been just as good without adding the rub at all!

Bourbon, Honey and Mustard Glaze – These are the only three ingredients in the glaze.  The stone ground mustard adds the zest and the honey and bourbon add the sweetness.  This is one of my favorite glazes, and works well with many dishes, but definitely adds a burst of flavor for this smoked tenderloin. If you want to mix it up a bit, try the Asian Sauce from this Pork Shoulder instead of the bourbon, honey mustard.

The only real preparation for the pork is to remove the fat and the silver skin.  The fat is easiest to remove by picking it off with your fingers.  The silver skin lifted up and peeled away by hand as well.  There were a couple of areas where I used kitchen shears to remove some stubborn fat, but this process took less than five minutes.

What is Silver Skin? You’ll see an area on various cuts of meats with a thin layer of connective tissue still affixed to the meat.  It may also be referred to as a membrane, especially on ribs.  It is easy to remove by hand.  It will shrink as you grill and cause the meat to warp.  It is also more difficult to cut through when it is cooked, so it is just easier to remove it as you prepare the meat.

Step One: Lay a piece of parchment paper on a sheet pan and lay several pieces of bacon side by side.  We used seven as it looked like it would be wide enough to cover the tenderloin.

Step Two: Start weaving bacon from the side to create a crosshatch, basket-weave pattern.

Note: It is much easier to do this with thinly sliced bacon.  Also, the thin bacon will crisp up much better than the thick cut variety.

Step One: Lay the tenderloin in the center of the woven bacon and apply the rub to both sides of the pork.

Step Two: Lift one side of the parchment paper (with the bacon) and wrap it over the top of the pork.

Step Three: Carefully peel back the parchment paper.  The bacon should adhere to the pork. Press down on the bacon to make sure it sticks.

Step Four: Repeat the process for the other side of the tenderloin.

This three ingredient glaze is perfect for the bacon wrapped pork.  It has a sweet and tangy flavor profile that complements the pork without taking over.

Step One: Pour the ingredients in a small pot.  Turn the burner to medium-high and stir while bringing the mix to a boil.

Step Two: Reduce the heat to low and let it simmer for 5-7 minutes, stirring occasionally.

Step Three: Turn off the burner and let it cool.  It will thicken slightly as it cools, but this is a glaze, and you want it to be on the thinner side to brush on later in the grilling process.

Step One: Set up the grill for indirect heat.  For gas grills, turn off the burners in the middle.  For the Big Green Egg, add a plate setter.

Note: I usually smoke at lower temperatures, but found that the higher temperature works better to help the bacon crisp up during the smoking process.

Step Three: Add apple wood to the grill.  For gas grills, add the chips to a smoking box.  Fruit woods are more mild and work well with pork.

Step Four: Insert a wireless meat thermometer to monitor the temperature of the pork.  When it reaches 140 degrees, move to the next step.

Step Five: Once the pork is almost at temperature, apply the glaze using a long-handled basting brush.  Brush on several layers of the honey mustard glaze.

This is an extremely tender cut of meat and the addition of the bacon drippings just provide even more juiciness.  As a result, you have a little bit of leeway in the final grilling temperature.  If the tenderloin stays on the grill for a little longer, you shouldn’t have to worry about it drying out or becoming tough.

The parchment paper wrapping trick is the easiest way I found to wrap the pork in bacon.  While I love eating thick slices of bacon, the thin sliced varieties work best here.

Stay on the fruitwood side of the smoking wood spectrum.  Apple, cherry, and plum are excellent choices.  You only want a little bit of smoke.  Large, billowing clouds of smoke will leave your dish tasting like an ashtray.  This is a case where a little goes a long way.

What’s the difference between a pork loin and pork tenderloin?

A tenderloin a boneless cut of pork that is cut from the muscle that is along the backbone. It’s long and narrow.

On the other hand, a pork loin is a wide and much fatter piece of meat. They can be bought with or without bones. The meat comes from the back of the pig.

Do I have to let the meat rest?

Yes, it’s vital to let the pork rest. If you rush it, then the meat will seem dry, and it’s just not very good. Instead, allowing it to rest makes the meat so juicy and delicious.

Is it okay to eat if it’s a little pink in the center?

Yep! As long as the pork tenderloin’s internal temperature reached 145 degrees, you are fine to eat it. If it didn’t come to temperature, then it will need to be cooked the rest of the way before eating. 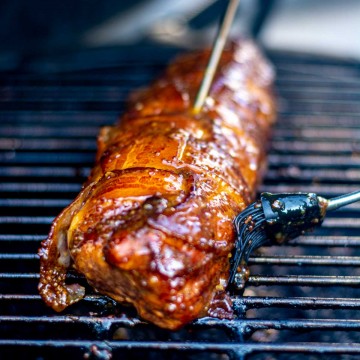 Removing Fat: Spend the time to remove the fat and silver skin.  It makes a big difference when trying to cut it later.  Parchment Wrapping: The parchment paper wrapping trick is the easiest way I found to wrap the pork in bacon.  Don’t skip it. While I love eating thick slices of bacon, the thin sliced varieties work best here. Temperature Check: Use a good quality meat thermometer to check the temperature.  145 degrees is all you need for the safe consumption of pork according the the USDA and The National Pork Board. This is extremely juicy (especially as it is wrapped in bacon) and will be a little forgiving, but definitely remove it at 145 degrees.  Rest Time: Let this rest after removing from the grill.  The resting process allows the juices to stabilize in the meat and it will retain its moisture.  Cutting it open too soon will have all the juices escape the meat. Wood Choices: For the smoke, stick to the lighter fruit woods.  These give off a mild flavor.  Too much smoke risks the pork tasting like charcoal.  A hint of the smoke is much more effective for the mild meat. If you are new to smoking, download the Smoking Cheatsheet that will give you all the scoop on pairing wood with your food.  Brushing Glaze: Brush the glaze/sauce on multiple times to get the thick and sticky exterior you are looking for. One swipe of the glaze will not be enough. This batch makes about 1.5 cups once it reduces so you have more than enough to keep brushing. Use a long grilling brush so your arm isn’t so close to the heat since you are brushing so much. 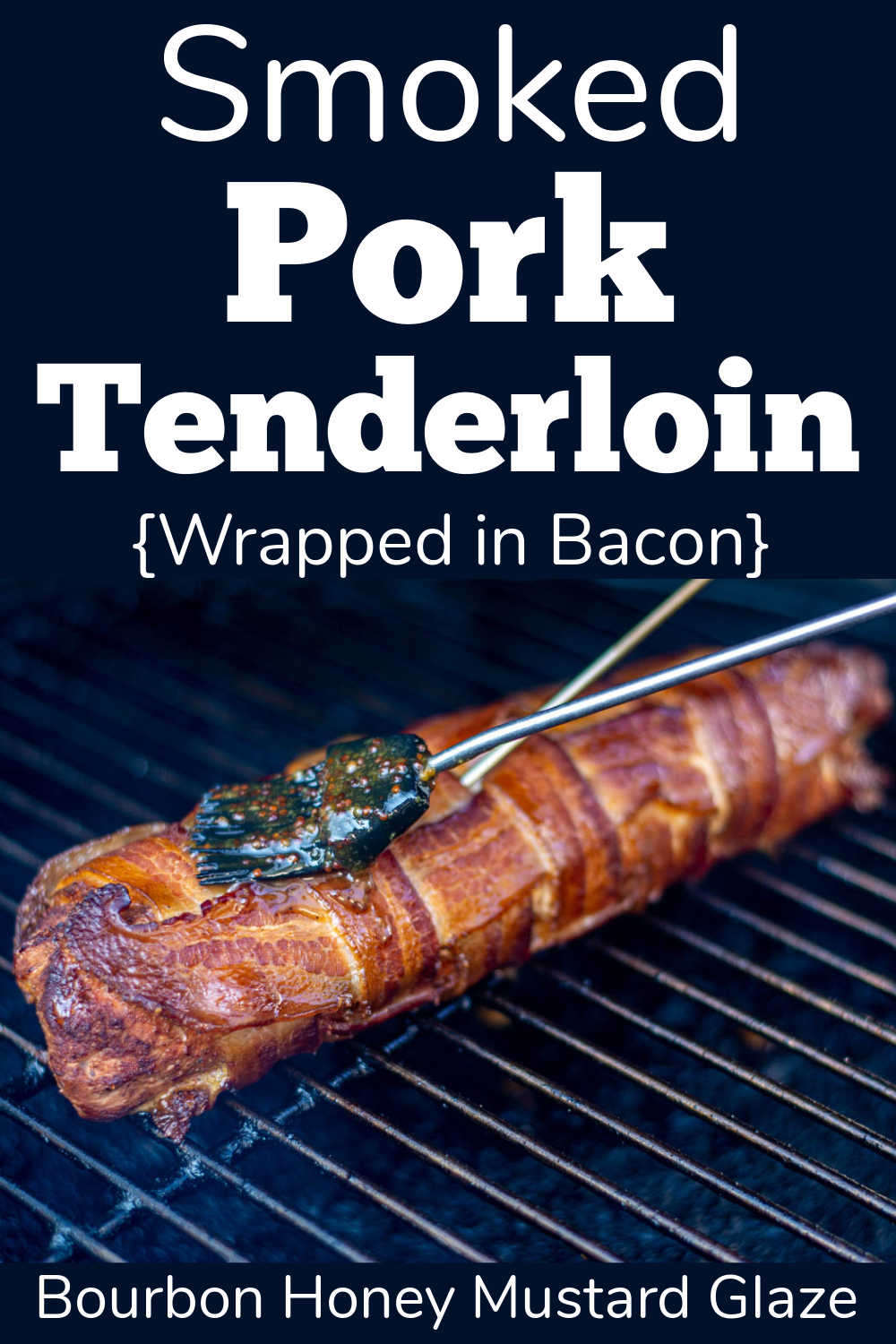 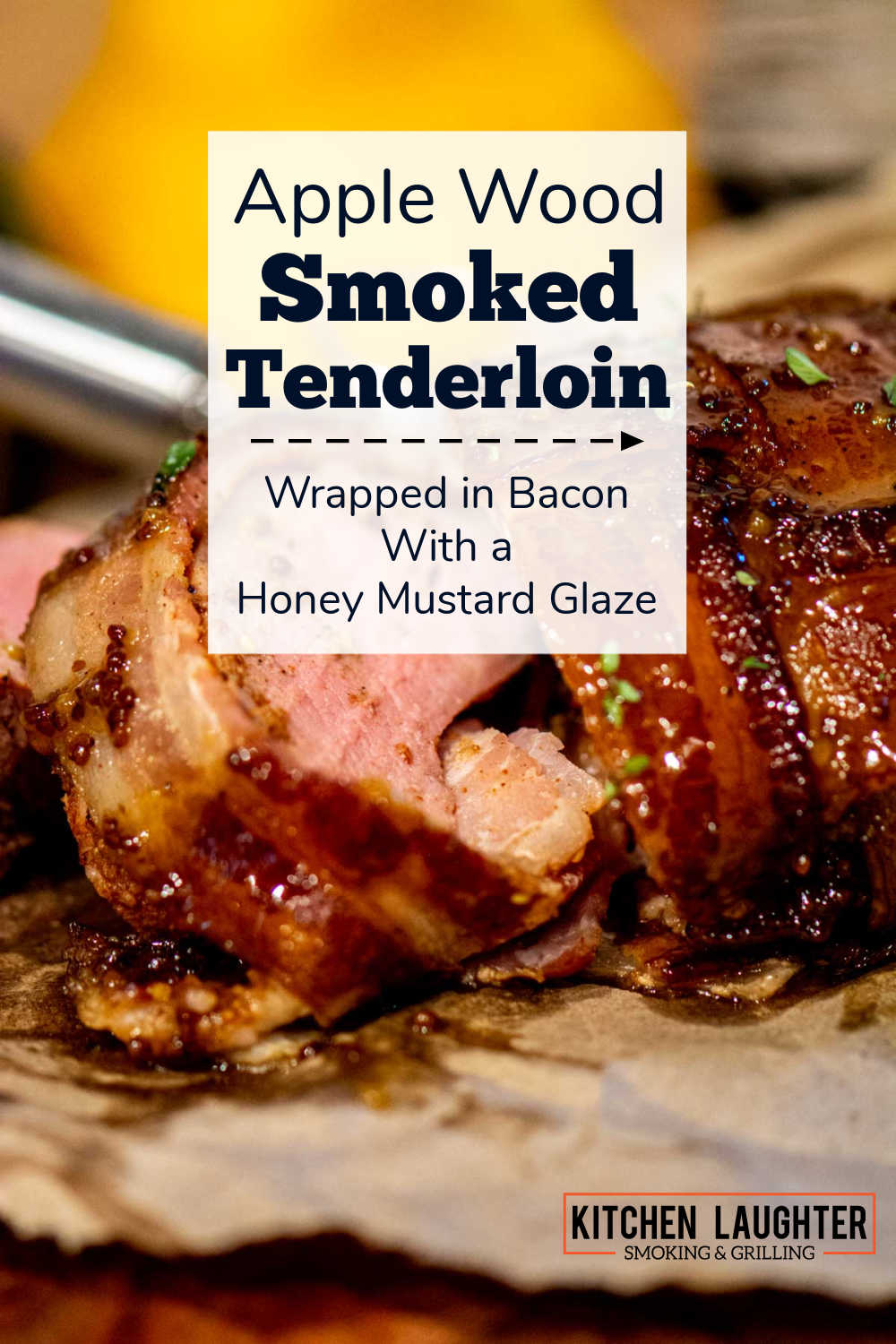