This is a phenomenal Grilled Root Vegetable dish with Berkshire Pork Belly. You’re going to spend a bit of time peeling and chopping the vegetable, but the end result is worth it!

Root Vegetables – These vegetables are primarily found in the fall, but most of them are in the grocery stores year-round.  Mix and match the ones that your family likes, and maybe add in one or two that you haven’t had before.  You will probably be surprised at the fantastic flavors.

Pork Belly – I found a great deal on Berkshire Pork Belly and bought a pound.  This recipe only needs a quarter of that, so I have some left over for some other fun treats!  Berkshire is a heritage breed that is known for its juicy and flavorful meat.  If you get a chance to lock in some of these, by all means grab it. Fair warning, though.  It isn’t cheap.

Step One: Chop ¼ pound of pork belly into ½” cubes.

Step Two: Place the pork belly in a small cast iron skillet on a 400 degree grill and let it cook for about 15 minutes, stirring frequently. This will serve two purposes.  First, it will provide some nice delicious cooked pork to add in to your root vegetables, and second, the rendered fat will minimize the sticking. Remove the pork belly from the cast iron immediately when you bring it inside, otherwise it will continue to cook.

Step Three: While the pork belly is cooking, chop a medley of root vegetables into bite-sized pieces.  We used rutabaga, acorn squash, butternut squash, baby potatoes, sweet potatoes, parsnips, turnips, onions and carrots. Use whatever you have. Plan for the end result to be 4-5 cups of cut vegetables.  We ended up with about twelve cups and had to make multiple batches.

⚠️ Warning: I made the mistake of putting too much pork belly in the cast iron skillet and it rendered so much fat that it looked more like I boiled them than getting a good sear.  To fix that, I moved some of the belly to another cast iron skillet.

Step Four: Reserve about two tablespoons of pork belly fat and add it to the vegetables.  You don’t want to use too much as it will drip into the coal and create flare ups.

Step Five: Place the vegetables in a single layer on the Lodge 12” Cast Iron Steel Grilling Pan.  Stir them at the five minute mark.  They should start to caramelize.  Turn them over and grill for another five minutes. If they haven’t started to darken, leave them alone and let them cook for another minute or two.

Step Six: Let them roast for another five minutes and remove them from the grill.  They should be fork tender and gorgeous!

Step Seven: Add the chopped pork belly.  You certainly don’t have to if you want this to remain vegetarian, but darned if the crunchy grilled pork belly isn’t just the best thing you can add!

Mix and match the root vegetables.  It is easy to swap them out.  I love including parsnips and turnips as they have that tanginess that works so well with the mild starch of the potatoes.  The carrots add a sweetness.  No matter which ones you include, make sure they are all cut to a uniform thickness so they cook evenly.

The key to this recipe is a good searing on the veggies.  If they aren’t starting to brown nicely at the five minute mark, let them sit.  It is so tempting to move them around, but the cast iron will create that wonderful and flavorful sear if you just leave them alone.  It is hard to be patient, but the end result is worth it.

If you don’t have this particular Lodge Grilling Pan, don’t sweat it.  Any old cast iron skillet will work wonderfully.  I like this one as the openings in the bottom allow the air to flow through.

It works just as well in a plain cast iron skillet.  Make sure that you have enough fat to lightly coat the bottom.  That will help the veggies from sticking.

Grilled Baby Potatoes – I love these tiny potatoes! They cook so much faster than the full sized varieties and still taste amazing! You can’t go wrong with adding more garlic to it.

Grilled Parsnips – This is an extremely fast cast iron grilling recipes to use some of your leftover parsnips. Don’t let them go to waste.

Grilled Sweet Potatoes in Foil – This is great! “Bake” a sweet potato on the grill while you are preparing your main dishes.

Keep the Pork Belly out of the dish if you want to keep it vegetarian. 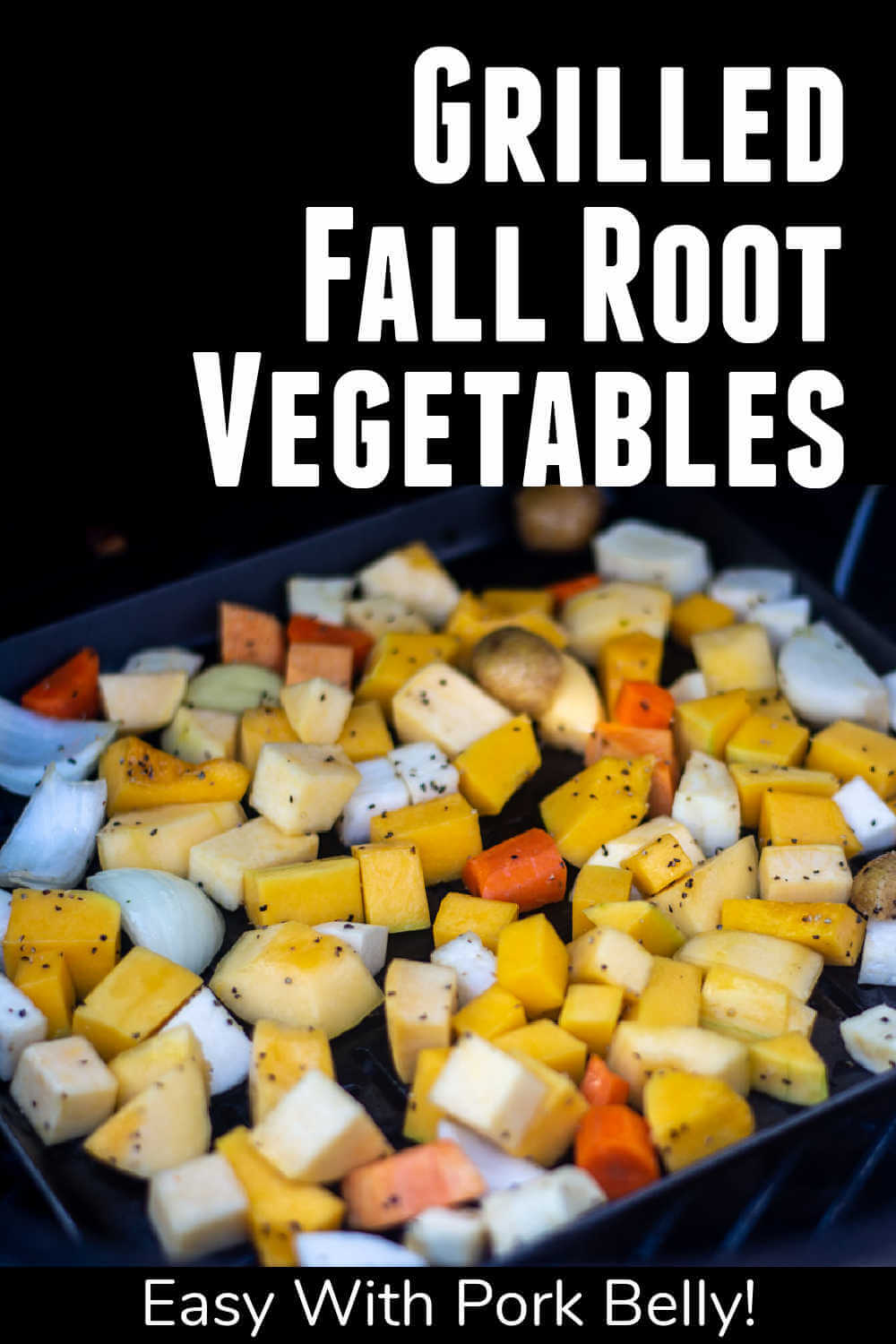 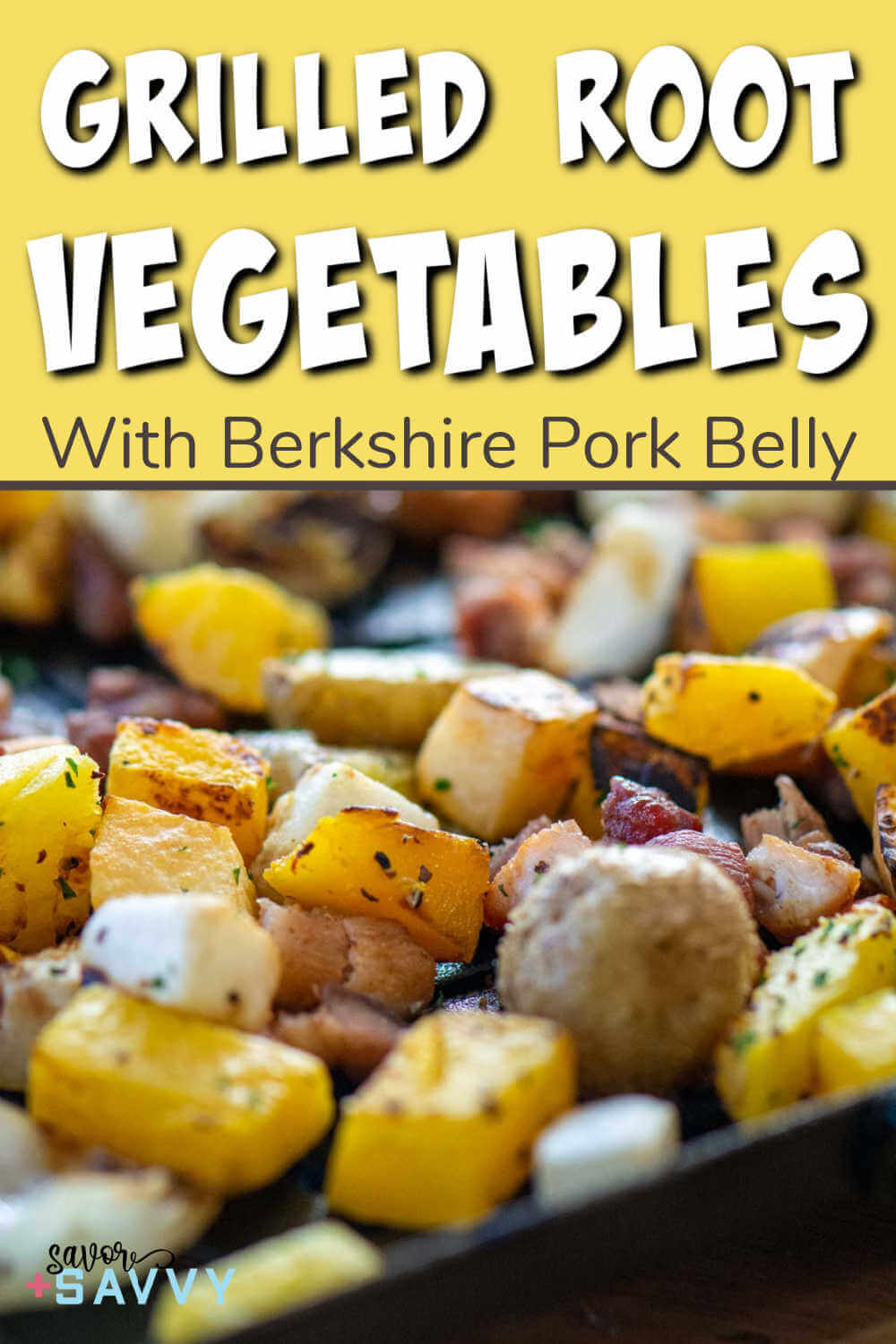