These crowd pleasing Grilled Rumaki are tender and so quick to make for cookouts or tailgating. Serve it plain or add a glaze on top for a two bite appetizer that go fast every time you serve them.

🍽️ Why This Works

Delicious – This has a wonderful complement of flavors and textures. Bacon is wrapped around a water chestnut and a piece of trimmed chicken liver. Then, a bit of Teriyaki sauce rounds out the profile with a bit of tanginess.

Perfect Finger Food – You need a toothpick or small skewer to hold these together, which makes it perfect for you guests to grab and eat.

Creative – I love grilling food that our friends and neighbors may have not been exposed to before. It is a blast to serve something creative. Besides being a great conversation starter, it is fun to try new and different foods.

Bacon – Use a fairly thick slicked bacon. I usually use thin sliced, but I think mine was too thin and the skewer did not do a good job keeping it all together without the bacon tearing. I had to double up the bacon to keep it intact.

Teriyaki Sauce – I made one from scratch, but if you ware in a pinch for time, substitute it with your favorite store-bought variety.

Water Chestnuts – I love the CRUNCH of these. While I recommend using whole water chestnuts, we had a few that I cut in half to make it easier to stick the skewer through.

Chicken Livers – You don’t get a powerful liver taste, but it does add an earthiness that complements the crispy vegetable and the tangy sauce.

Lined Grilling Pan – I lined a grill-safe pan with foil, but a cast iron skillet would work just as well. Lining a pan with foil makes cleanup a lot easier!

Toothpicks – These held the bacon securely around the liver and water chestnut.

Step One: Add all of the Teriyaki Sauce ingredients to a small sauce pan.

Step Two: Heat over medium heat until it is near-boiling, stirring constantly. Reduce heat to a low simmer.

Step Three: In a small bowl, mix the corn starch and water to create a slurry. Slowly add it to the sauce while stirring until it reaches the desired thickness. Remember that it will continue to thicken as it cools, so plan accordingly.

Prepare and Grill the Rumaki

Step One: Trim the fat off of the chicken livers and cut them into small, bite sized pieces. We cut them into thirds and added them to a glass bowl.

Step Two: Open the water chestnut can and drain out the liquids. Pour them onto the livers.

Step Three: Add about half of the teriyaki sauce to the livers and water chestnuts. Mix it up with your hands to get a good coating, cover with saran and stick it in the refrigerator for an hour to marinate.

Step Four: After they are done marinating, cut strips of bacon in half and lay it on the cutting board. Add a water chestnut and a piece of liver. Fold the bacon over and stick a toothpick through all of it to keep it together when grilling.

Note: The eagle-eyed amongst you will notice that the bacon wrap is doubled up. My bacon was pre-sliced too thin, and every time I tried to skewer it, the bacon would tear and the rumaki would fall apart. It was easy enough to double up the thickness. Who doesn’t love MORE bacon?

Step Five: Line a sheet pan with foil and add the rumaki. You can keep them close together. Grill at 325 degrees on direct heat for about 30 minutes. Make sure to turn them over every five to ten minutes to avoid burning.

Step Six: Remove from the pan and let them cool slightly on a paper towel to absorb any bacon fat. Serve with some extra teriyaki sauce.

These are easy to grill in a cast iron skillet or a sheet pan that is lined in foil. The foil wrapping makes cleanup a lot easier!

If you want to bake these in the oven, cook at XXXXXX

Use a bottle Teriyaki sauce if you are running short on time. Keep some ramekins filled with a bit extra for dipping after they are grilled.

Rumaki was originally served in the Trader Vic’s restaurants about 50 years ago. If you aren’t familiar, this is a chain of restaurants that specializes in Polynesian food.

It became a social sensation when it was featured in the Mad Men television show (Season Two Episode Eight for the die-hards).

Where did Rumaki originate from?

This is a Polynesian recipe that was first shown on a menu of Don the Beachcomber in 1941. It was more commonly found in the Trader Vic’s restaurant chain about 50 years ago.

What is Rumaki Made of?

Rumaki is a simple appetizer made from water chestnuts and chicken livers wrapped in bacon and served with Teriyaki Sauce.

Does Rumaki have to have liver?

You can serve this without the chicken liver, but it would be a bacon-wrapped water chestnut. The liver adds an earthy base flavor that pairs well with the tangy Teriyaki sauce. I do have friends that are sensitive to organ meat, so I did make it without the livers to accommodate their diets. A lot of people refer to this kind as “kid rumaki” since children will eat the mild chestnut and the bacon. 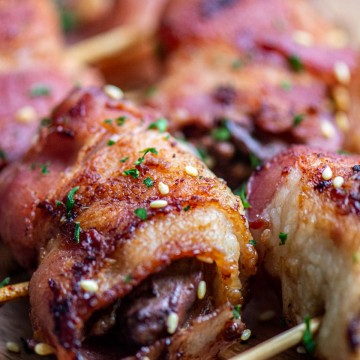 Teriyaki Sauce: Use bottled if you don’t want to make your own or use your own favorite homemade sauce.  Pan Choice: Using a raised surface will allow the rumaki to not sit in a pool of bacon  grease. We have done it both ways and the using a raised baking rack on a sheet pan allows more air to flow around and results in crispier bacon.  Water Chestnut Cutting: Either cut the water chestnut in half or use sliced as the whole is very hard to keep rolled up. Cutting it in half made it a lot easier.  Chicken Livers: Depending on your choice, we used ¼ to ½ of a piece of chicken liver for each rumaki. Using more than that makes the liver slide out and become very messy. 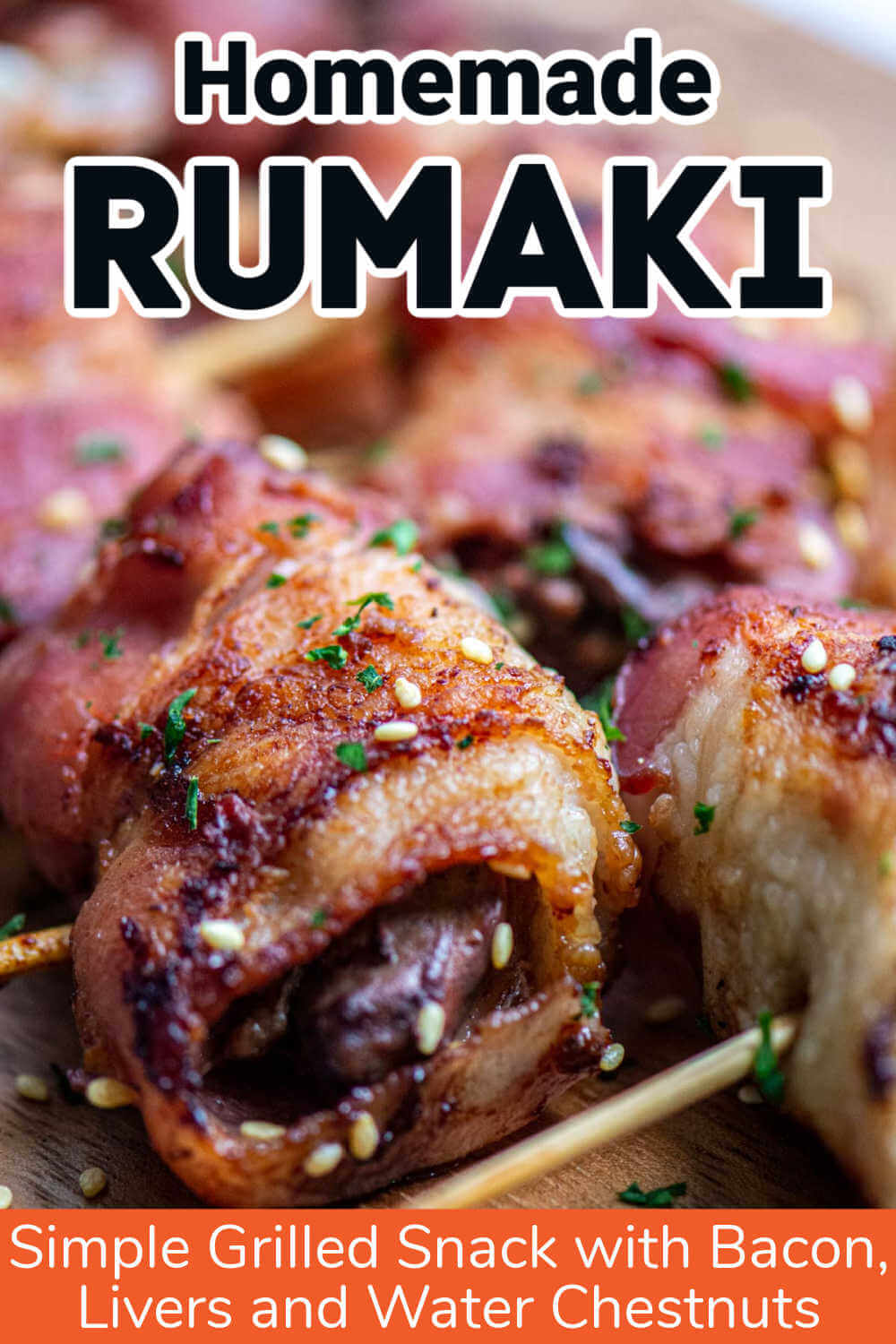 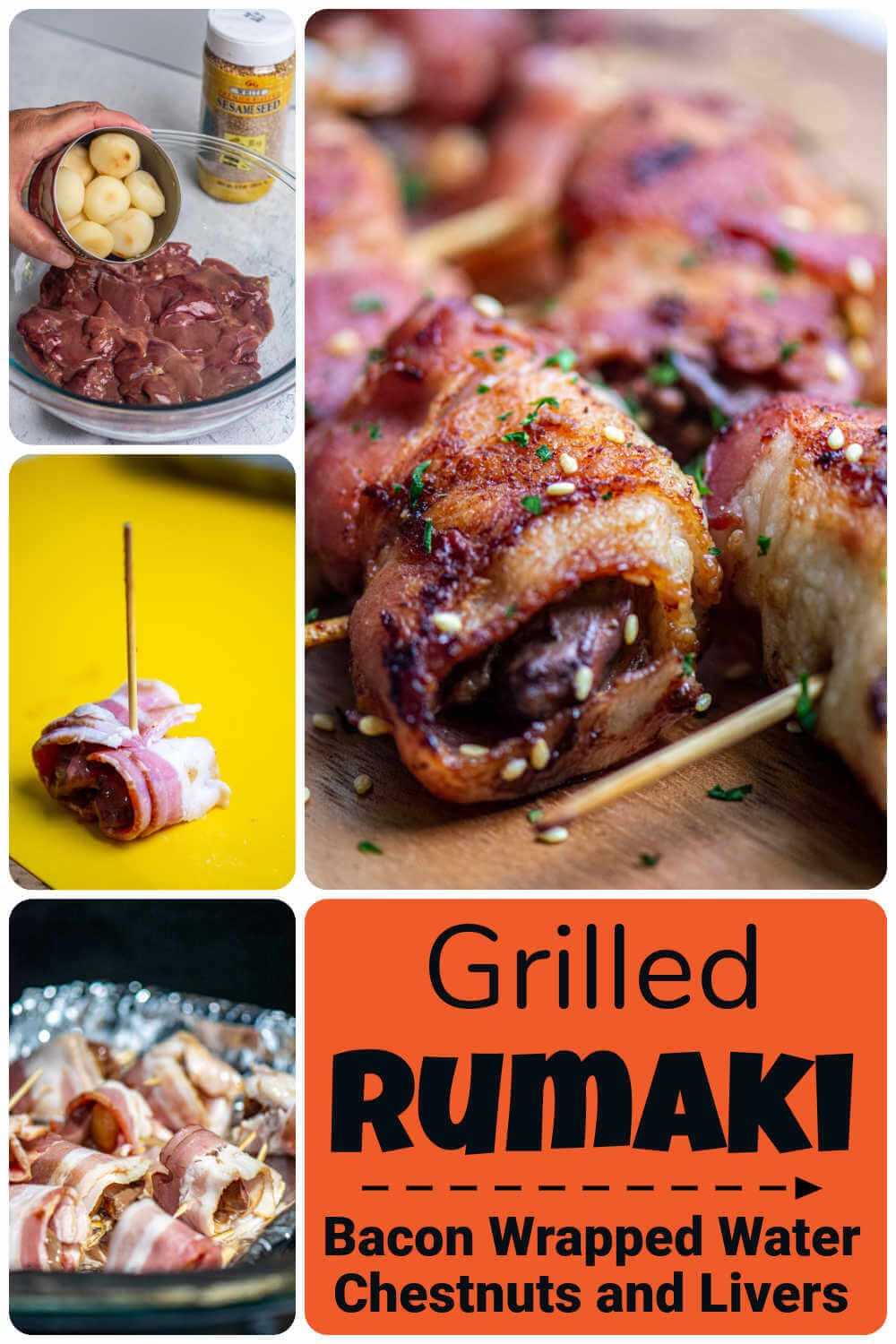