Grilled Bacon Wrapped Chicken Livers in a Cast Iron Skillet is a fantastic treat that will melt in your mouth. Add a touch of brown sugar to balance the flavors.

Wait! Don’t leave! Not yet! This will be the recipe that will shock you with its deliciousness! It will leave you questioning what is actually inside the bacon! I promise you, it doesn’t even taste like your Grandma’s fried livers.

🍴 Why You’ll Love This Recipe

Bacon – Use thinly sliced bacon from the store. You will cut each strip in half, so you will not need a full pack.

Chicken Livers – The cheapest place I have found to buy these have been at our local oriental stores. I have not had the best of luck in our corner grocery stores. Either they have it, but it is older, or they don’t have any at all. The oriental store always has it in stock. It’s fresh and is much less expensive.

Brown Sugar – Two tablespoons is all you need. When you sprinkle it on at the end of the grill, it will leave just a hint of sweetness.

Step One: Heat the grill to 450 degrees on direct heat. Give yourself time as this may take 30-45 minutes on a Kamado style grill. If you are grilling on a gas grill, you will be ready in just a few minutes.

Step Two: Cut the strips of bacon in half and wrap them around a chicken liver. Place it in a small cast iron skillet. Don’t worry about adding any oils, as the bacon fat will render quickly.

Step Three: Place the cast iron skillet on the grill and cook for 25 minutes. The dish will be bubbling with the fat from the bacon and it may be hard to tell when the liver is fully cooked. Cut one open to double check.

Step Four: For the last 2-3 minutes, sprinkle two tablespoons of brown sugar on top and continue to grill. This adds a surprising sweetness to the dish. Remove from grill and serve to your family and guests!

Use thinly sliced bacon for this recipe. We pulled out some of Jason’s smoked bacon from the freezer. He sliced it on the thick side, and they just did not wrap around the livers well.

We ended up just frying that bacon the next morning for breakfast. Use the thinnest bacon you can find. I used hardwood smoked bacon, but maple bacon would complement the brown sugar too!

If you wrap bacon on just about anything and grill it, the taste is out of this world. That is just about what happened here. The bacon already has a hint of smoky flavor along with the fats that make everything extra juicy.

I had to find a creative way to use up tons of chicken livers that Jason bought and froze when I was out of town. Yes, that is a recurring theme in our house. When left unsupervised, he goes a wee bit crazy at the store with grandiose ideas of everything he needs to put on the grill. Hence, the two extra pounds of chicken livers I discovered in my freezer! 😀

The end result was mouthwatering, though. I devoured them and basically pushed him aside for these wrapped livers.

Is chicken liver good for you?

Yes! Chicken liver is filled with folate, iron, vitamin A, vitamin B12, riboflavin, and more. Plus, when cooked right, it tastes amazing and is hard to beat.

Do I need to clean the livers before cooking?

Yep, it’s a good idea to rinse and pat dry before cooking. Just make sure to dry it well with a paper towel.

Do I need to soak chicken liver in milk?

It’s up to you, but for this recipe, it’s not required to soak it. If you do soak it in milk, it helps remove some of the metallic taste that the liver tends to have. To soak it, simply place it in a dish with milk and keep it in the fridge for 1-4 hours. Dry it with a paper towel before you begin cooking with it. 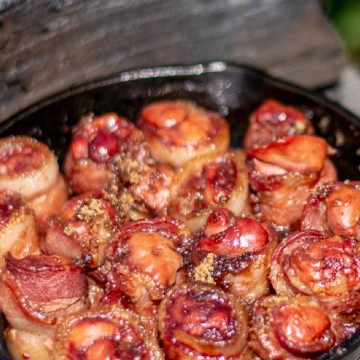 Wrapping Bacon: You should not need toothpicks to keep the bacon attached to the livers.  The bacon should stick to itself and stacking them close together in the skillet will keep it from unraveling.  Thin Bacon: Use thinly sliced bacon for this recipe. We pulled out some of Jason’s smoked bacon from the freezer. He sliced it on the thick side, and they just did not wrap around the livers well. Pan Choice: We used a cast iron skillet but you can use a disposable pan. Use something that makes clean up easy. The sugar is sticky.  Doneness: Check internal temperature to reach 165 for the livers to be done. Don’t gauge it on time. 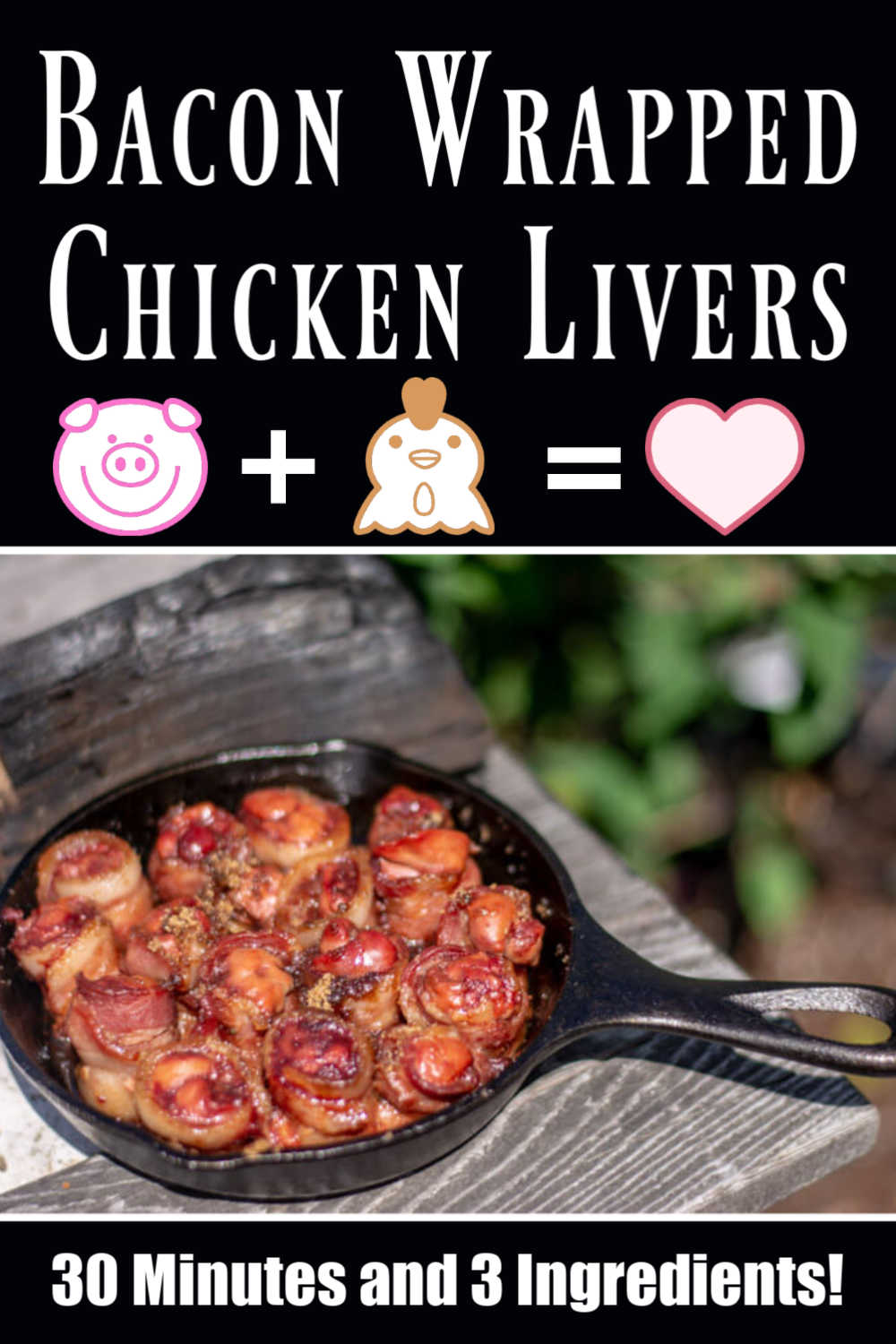 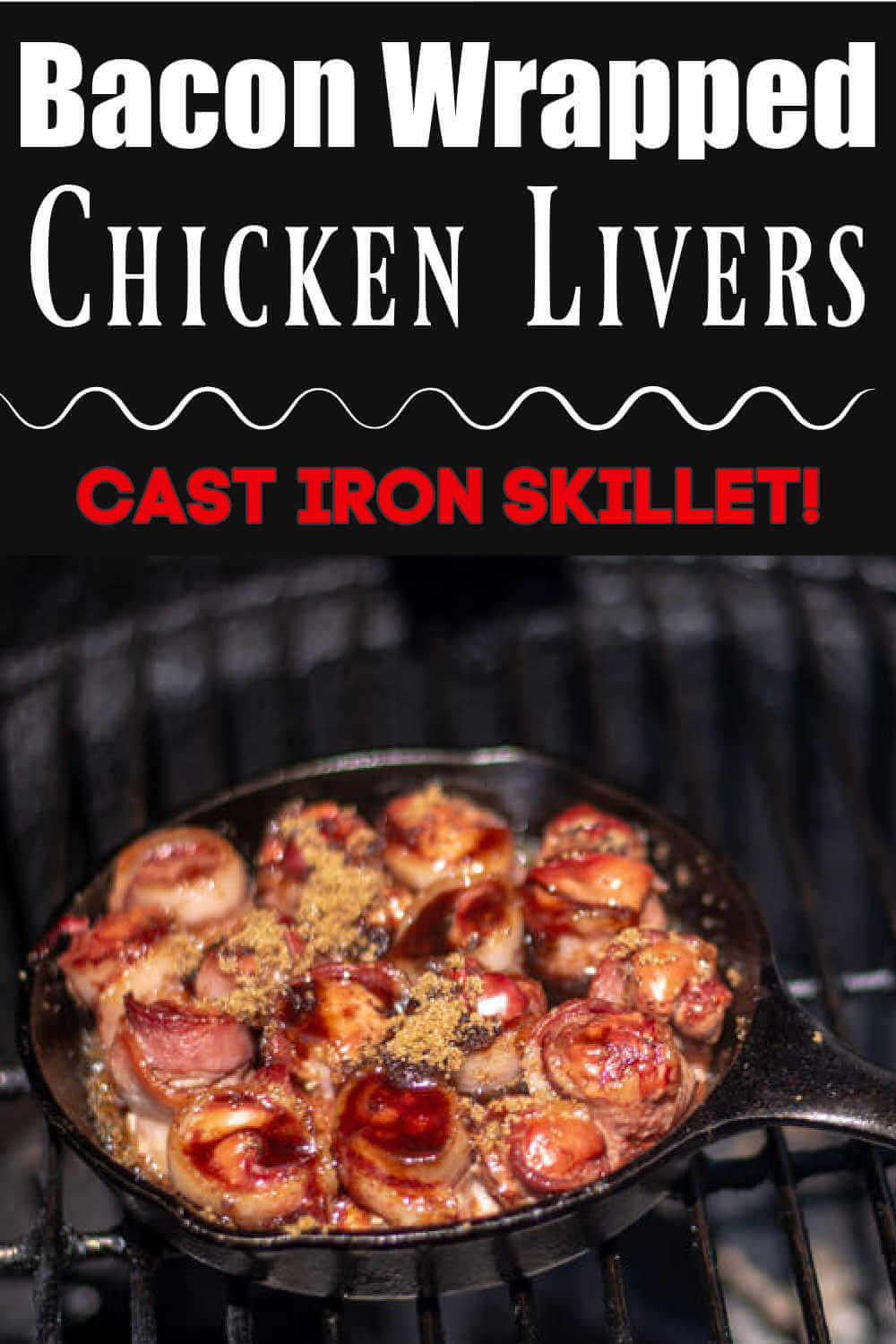