These delicious Grilled Beer Brats will be the hit of your BBQ. They are easy to make and insanely delicious. Expect a line at your grill!

Hmmmm, let’s talk about this recipe! There is part of me that thinks I should save it until September or October.  That way it will be fresh for Oktoberfest, but what the heck.

How many more times should I mention that some of the tastiest meals are the easiest like all in one pan Sausage and Peppers on the Grill?

Simple: This is a really simple recipe that everyone can make with a lot of success.

Fast: The biggest time on this one is the sautéing the onions. But once you put them in the pan, you leave them to glaze and so you it doesn’t require much from you.

Beer: Beer has really seen a resurgence in recent years.  It is no longer just a plain ol’ lager or stout. Now, there are hundreds of varieties available at most grocery stores and specialty stores.

We tried this with a couple of different beers but we always seem to come back to our favorite, which is Deschutes Fresh Squeezed IPA.  Deschutes is an incredible brewhouse out of Bend, Oregon that is expanding nationwide. If you can, try to find it at your grocery store.  It is well worth it!

Be bold, and try a seasonal cherry-infused or a rich Belgian and experience the flavor differences. I love this recipe because it is limitless in the flavor outcome that you can get with just changing the beer or changing which brats you pick at the store.

Brats: When you are at the grocery store, you will see BRATS and then you will see BEER BRATS. The beer ones actually list beer in the ingredients like the Johnsonville Beer Brats. You can choose either one. You are going to simmer the brats in beer and onions for 15 minutes so the beer you choose is going to be infused anyways. Bratwurst

Step One: Start by sautéing the sliced onion in a pan with a tablespoon of olive oil. Don’t touch it. Seriously, hands off! We are all so excited to keep it going and want to mix it, but really, don’t even think about touching it.

Step Two: Wait about 5-8 minutes. You will see the browned edges of the onion. You don’t need to move it to see it. Only after the onions have had a chance to brown, should you stir and sauté a bit more.

Step Three: Pour two bottles of your favorite beer into the sautéed onions and bring the mixture to a boil. Once you reach a boil, add the brats (they will not be fully immersed in the beer/onion mixture).

Step Four: Turn the stovetop to a simmer.  Cover it with a lid and let simmer for about 15 minutes.

Note: I found I could sauté the onions and cook the brats in the beer inside or outside in a cast iron skillet. That is why you see two different photos above. Either option works great!

It’s time to move the operation outside.

Step One: Heat the grill to 400 degrees. You want a nice sear on the brats, so we’ll use a good, strong direct heat.

Step Two: After the brats are fully cooked, remove them from the beer and add them to the grill for 2-3 minutes. Flip them over and grill for another 2-3 minutes for that nice and tasty sear.

Step Three: At the same time, keep the beer and onion mixture simmering to reduce the beer by half.  You’ll top the brats with this when you serve.

Eat the brats by themselves or on a big bun to hold the sausage and toppings, it’s all up to you. Some of our favorite ways to jazz up brats are:

Sauerkraut – Buy a jar of it from the refrigerated section of the grocery store (near the hot dogs) and add it to the brats.

Mustard – Choose your favorite mustard to top on by its self or under the sauerkraut. We love to use the stone ground mustard with this.

Onions and Peppers – Top with grilled/sautéed onions and peppers.

Homemade Sauce – You can make your own homemade sauce like we did with the Honey Mustard Beer Brats or the Cranberry Chili Beer Brats.

These brats are so easy to serve with just about any meal you make. Grilled Baked Beans or Grilled Peach and Bourbon Baked Beans will make a hearty cookout meal where everyone will want those recipes.

If you are planning on an Octoberfest event, don’t forget to make use your leftover brisket and make Guinness Baked Beans in the Slow Cooker.

What is the difference between bratwurst, sausage and kielbasa?

They are all sausages! Bratwurst has nutmeg, sage, ginger and caraway and tend to be the ones that we refer to as “brats.” Kielbasa is one of the most important foods from Poland. It has marjoram, garlic, cloves and smoke. People that like a milder taste will choose the kielbasa over the other two.

Can the brats be a little pink in the middle?

No, they should be cooked through and you are looking for an internal temperature of 145 degrees. If any meat looks slightly pink but the temp registers at or over 145, it is considered safe to eat.

Why do you simmer the brats before grilling them?

The simmering process soaks in the beer, makes sure the brats are fully cooked and will minimize the casings from splitting.

Do you eat these plain or on a bun?

You can do either, it’s all up to you. If you choose a bun, go with one that is hearty enough to hold the brats and whatever toppings you choose to add to the top. 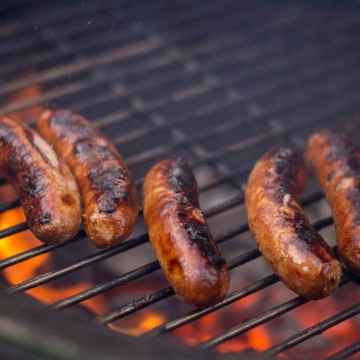 Make the Beer and Onion Mixture

Beer Choice: This recipe can be modified significantly just by changing the beer.  Give it a shot.  I used an IPA, but a darker beer will provide a deep, rich caramel-like flavoring that will work extremely well with the onions. Topping Choices: Sauerkraut – Simply buy a jar of it from the refrigerated section of the grocery store (near the hot dogs, usually) and add it to the brats on a bun or lay out brats and simply top with sauerkraut. Mustard – Choose your favorite mustard to top on by its self or under the sauerkraut. We love to use the stone ground mustard with brats but you can use the kind your family loves. Onions and Peppers – Top with grilled/sauted onions and peppers.  Homemade Sauce – You can make your own homemade sauce like we did with the Honey Mustard Beer Brats or the Cranberry Chili Beer Brats.  Fully Cooked: Make sure the brat is at 145 degrees to be fully cooked. 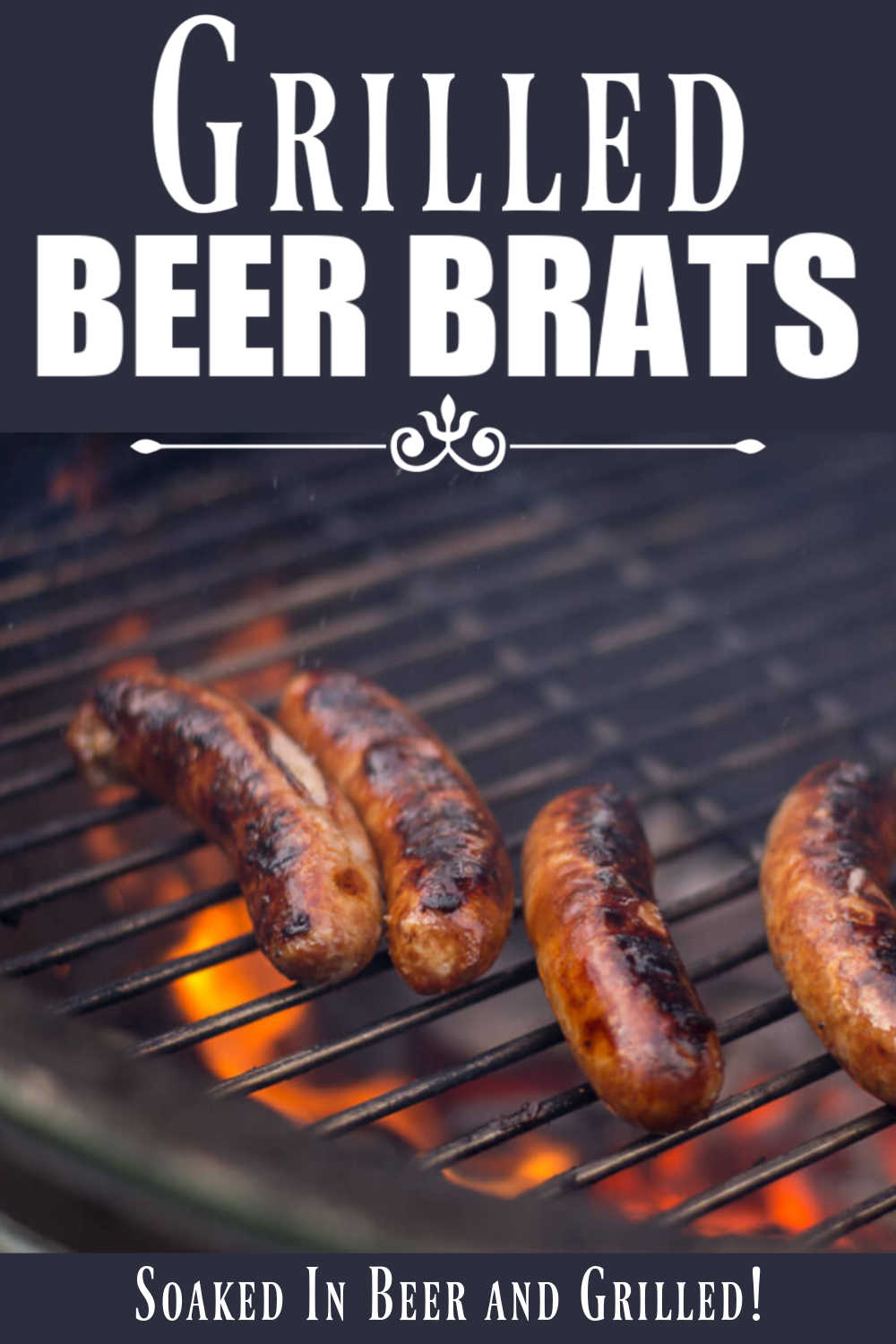