Grilled Cranberry Chili Sauce Beer Brats is a fun twist on a classic recipe. Grill the brats outdoors and add them to the slow cooker Cranberry Chili sauce for a tasty finger food.

So, Jason bought several packs of beer brats…he was left alone at the store, unsupervised (big mistake!) and I needed to now figure out what to do with them all. I wanted to try something different than just cook them the old way like we do in our Beer Brats recipe.

So, if you see a beer brat recipe trend in the next couple weeks, you know why! Did I mention he bought SEVERAL packs? The first recipe I will tackle is making Slow Cooker Cranberry Chili Sauce Beer Brats. This is one of those inside/outside recipes. So let’s get started!

Step One: Set up your grill for indirect heat and place a cast iron skillet on the grate.

Step Two: Pour in a bottle of beer and let it heat up. Once the beer is nice and hot, gently add the beer brats and let them cook until they are cooked through.  The skin will turn a light grey color.

Step Three: Remove the cast iron skillet and brats and set up the grill for a direct cook.

Step Four: Remove the brats from the beer and place them back on the grill to get a nice sear.  I cooked them over direct heat for about three minutes on each side.

Step One: Spray the inside of crockpot with non stick spray. This recipe can get good-and-sticky once it starts to simmer.

Step Two: Combine Chili Sauce and one can of jellied Cranberry Sauce into a crockpot and turn it to low. Allow them to cook on low for 4-6 hours.

Step Three: In the last 1-2 hours, slice the beer brats into one inch segments and add them to the cranberry/chili sauce mixture. Stir to cover the brats.

Step Four: Serve them straight from the crockpot or use toothpicks and serve on a platter as well.

Substitute kielbasa or any other cooked brats if you don’t like the beer flavor. There are lower calorie chicken brats that would be amazing in this sauce.

Grilled Beer Brats – This is the classic grilled brat recipe. You can’t go wrong with the slow cooking in beer followed by a sear.

Grilled Beer Brat Chili – This is the perfect party recipe. Whip it up in a disposable pan and bring it to your event. This is so tasty!

Grilled Brats and Brussel Sprouts – This is a fun finger food that combines soft and tasty brussel sprouts with the richness of the brats. 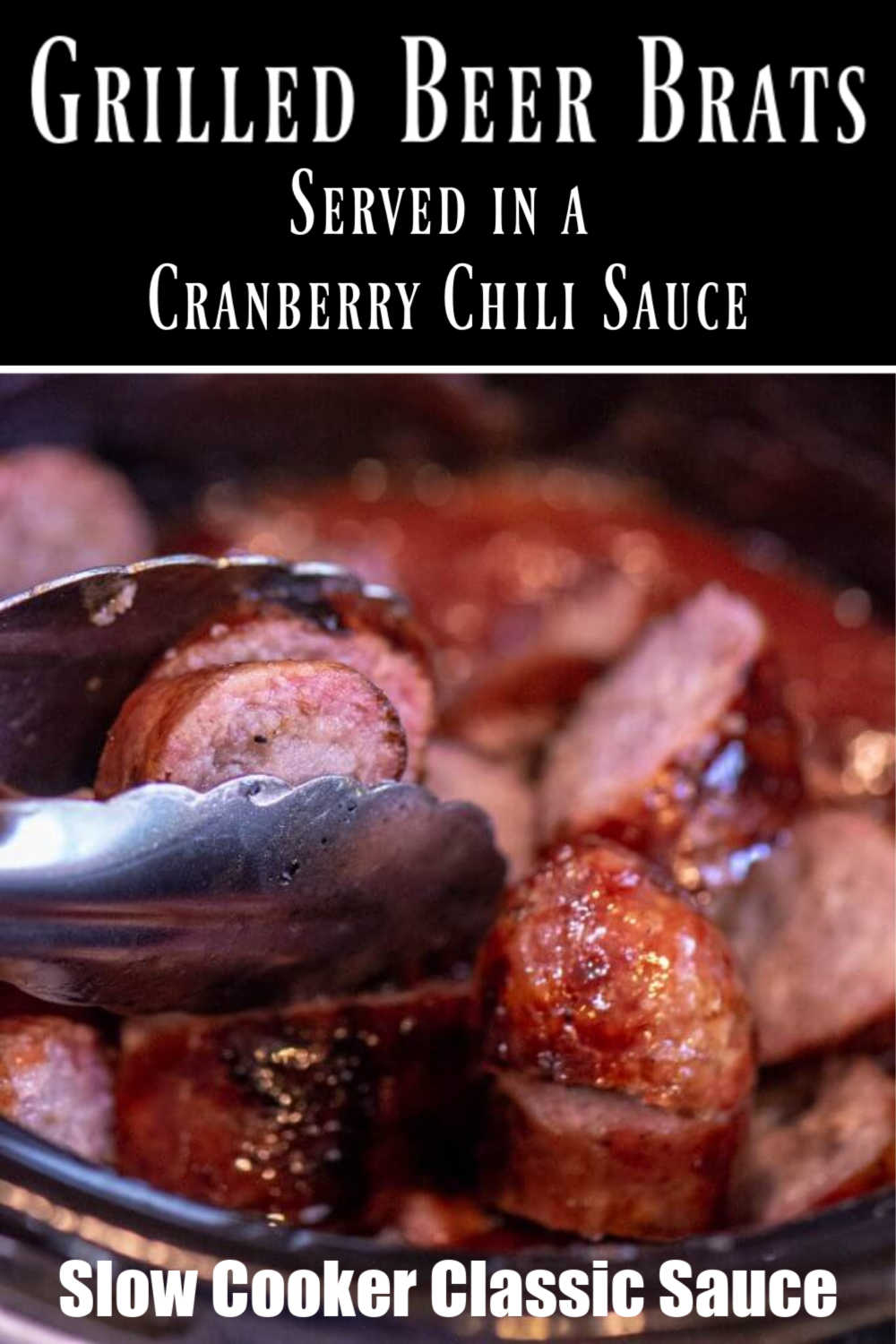