Looking for a good Flank Steak Substitute? We’ve got you covered! Not only are we including our favorite beef replacements, we are adding in some vegan options.

🥩 What is Flank Steak?

The flank steak isn’t really a traditional steak at all! It comes from the extremely tough muscles of the cow’s belly.

Because it is so tough, it was typically one of the cheapest cuts of meat at the butcher, but with a few tips and tricks, this flavorful cut can be a perfect choice.

It is also known as a London Broil (in some areas). You may also see it called a jiffy steak.

You’ll typically see recipes that call for flank steak will include a marinade in an acidic base, or manually tenderizing it using a mallet. The other way to make this more tender is using a low-and-slow grilling, where the connective tissues will break down over time.

It is much more common to use a marinade, a hot grill, and then slicing against the grain though.

Tip: For the best results, cut across the grain. The grain on flank steaks is very distinctive, so you won’t have to guess.

You’ll most commonly use this steak where strips of meat are needed (like fajitas).

There isn’t a lot of fat in this cut, which means you’ll most likely want to tenderize it using one of the techniques above.

I almost always cut this into strips for meals. I try to cut in thin slices just in case the meat didn’t tenderize as much as I had hoped.

Listed below are the most common substitutes and a quick summary that you can easily refer to.

There are two types of skirt steaks: the inside and outside. This is named based on the location under the ribs where they are cut.

It is hard to find outside skirt steaks in grocery stores. They are larger and thicker, but end up going to commercial operations. What you’ll find in the grocery store is almost always the tough inside skirt.

These are both pretty lean cuts, but you’ll typically see some fat marbling on the skirt steaks. Don’t be fooled, though. There are still large connective tissues that can make this tough if you don’t take the proper precautions.

Note: The only store I routinely find the outside skirt steak is at Wild Fork. They do a great mail order. The other option is to ask your butcher to special order it.

Hanger steaks have recently become more popular. Also known as “Butcher’s steaks,” these are cut from the abdomen of the cow. These have more marbling (similar to the skirt steak) but can still be chewy if you overcook.

Like the flank steak, these absorb marinades extremely well. You should prepare them in a similar manner and definitely cut across the grain. You’ll have the most success if you don’t cook these past medium to medium rare.

It can be harder to find these in the store, but I have had luck at Costco. If you can’t find it, ask your butcher.

I absolutely love a good tri tip! This cut is most commonly found in the western United States, so if you don’t see it in your grocery store, just ask the butcher to cut one for you.

This is also known as a Santa Maria or Newport steak. This is cut from the sirloin, near the hip of the cow and will typically be in 1 ½ or 2 pound cuts.

Since this is a thicker cut of beef, you’ll need to marinade it longer. I typically let it soak up the marinade overnight.

Like the other lean cuts, this will get tough if you cook it past medium.

The flat iron steak is cut from the shoulder area of the cow and is also known as a Butler’s or Oyster Blade steak.

These make an excellent substitute as they typically are found in a uniform thickness, making it easy to grill. They have a lot more marbling than a flank steak, and typically cost a little less.

While a marinade will help with this cut, it really isn’t necessary. Odds are that your flank steak recipe calls for a marinade, so if you are replacing it with the flat iron, you should follow the same instructions.

This is another cut of beef that is harder to find out on the store shelves. I have almost always had to ask the butcher and they had it in the back.

This is the most common cut of meat you’ll find on the store shelves. This is cut from the area just below the tenderloin, making it a bit more forgiving to grill.

You’ll notice that there isn’t the distinctive grain pattern you’ll find in a flank steak. It will still absorb the marinade easily and the uniform thickness of the cut makes it great for grilling.

It is still a lean cut and you’ll want to grill it to no more than medium.

The only real drawback to this cut is that it won’t work as a good replacement if your recipe will roll, stuff or tie the steak. In that case, one of the flat cut steaks will be a much better option.

Flap steaks are cut from the abdomen of the cow, just down from the flank. The biggest difference is that these will have more marbling, but otherwise cook extremely similarly.

These typically cost a little less than the flank, but I think that the lean flank steak has a “beefier” flavor.

In different parts of the country, you may see this marketed as “sirloin tip” steak. Regardless of the name, you will find the most success with using a citrus marinade to help break down the connective tissues.

Note: You may see this called a “Bavette” steak. When I do, I know the butcher is using a fancy French word and usually the prices reflect it. Don’t be fooled. The flap steak should be pretty inexpensive.

Ok. In full disclosure, I definitely can be lazy at times! We all have those days when we’ll pay a bit more for something in order to save time later. That is my love-hate relationship with pre-cut beef strips.

The butcher will cut them thin (against the grain) and then package them up. It is typically a bit more expensive, but if I am in a rush, it is totally worth it.

I like to season these myself, so I avoid the ones that have been pre-seasoned. They always feel a bit too salty for me.

There are times when you want to make a recipe with vegan alternatives and these five options are going to be the “go-to” ones you reach for time and time again. Making Beef and Broccoli stir fry using tofu or sliced up portobello mushrooms are going to taste out of this world.

So, I definitely prefer my red meat, but my favorite vegetarian substitute is large portobello mushrooms. They are extremely versatile and I even made a portobello pizza with them.

Since most of the flank steak recipes require thin slices for things like fajitas or stir fry, these mushrooms become a fantastic replacement. The “meat” is really dense and it holds together well. It also slices easily, keeping a similar size, shape and texture to the beef.

While you can still marinade them, I recommend brushing the marinade on while they are grilling. They absorb the flavors extremely fast and will cook even faster than the flank steak.

The only real key for Tofu is to use the “firm” variety. Soft tofu will fall apart too easily and won’t hold the shape you want for fajitas.

Brush the marinade on this as well. It is a soy-based product filled with protein that readily takes on the flavor of anything it is served with.

If you cut it thinly, it will work perfectly for a vegan-friendly flank steak substitute.

I adore cauliflower! One of my favorite recipes is the smoked whole head of cauliflower, as it complements virtually any flavors you add to it.

In this case, slicing ½ – ¾” slices and cooking that with the same marinade you would for the flank steak is a phenomenal idea. The center of the cauliflower is firm and dense and really holds up well to slicing, like you would the steak. Your seasoning will be the star of the show.

I bet your family won’t really know (or care) that this is a vegan friendly substitute. It will just taste like heaven and is significantly less money than beef.

There are vegan friendly steak substitutes you can buy in the store. I really haven’t experimented with them too much, but wanted to show it as an alternative.

In my mind, these are more expensive and I would much prefer to use cauliflower, mushrooms or cabbage as I know exactly what I put in them.

Cabbage works well in a pinch. While it absorbs the flavoring well, it may have a tendency to fall apart a bit easier. The hard, dense centers work well for slicing, but the looser leaves on the outside may fall off.

It really doesn’t matter, other than it will be slightly different texture than the thinly sliced steak pieces.

Like cauliflower, this is a very inexpensive option that is also extremely good for you.

What steak is the most similar to flank steak?

When you are at your grocery store or butcher, ask for skirt steak or flat iron for the most similar cut.

Are flank steak and flat iron the same thing?

Alright! There are numerous beef and vegetarian substitutes for flank steak to choose from, so if you are ever in a pinch, refer back to see what else will work well. 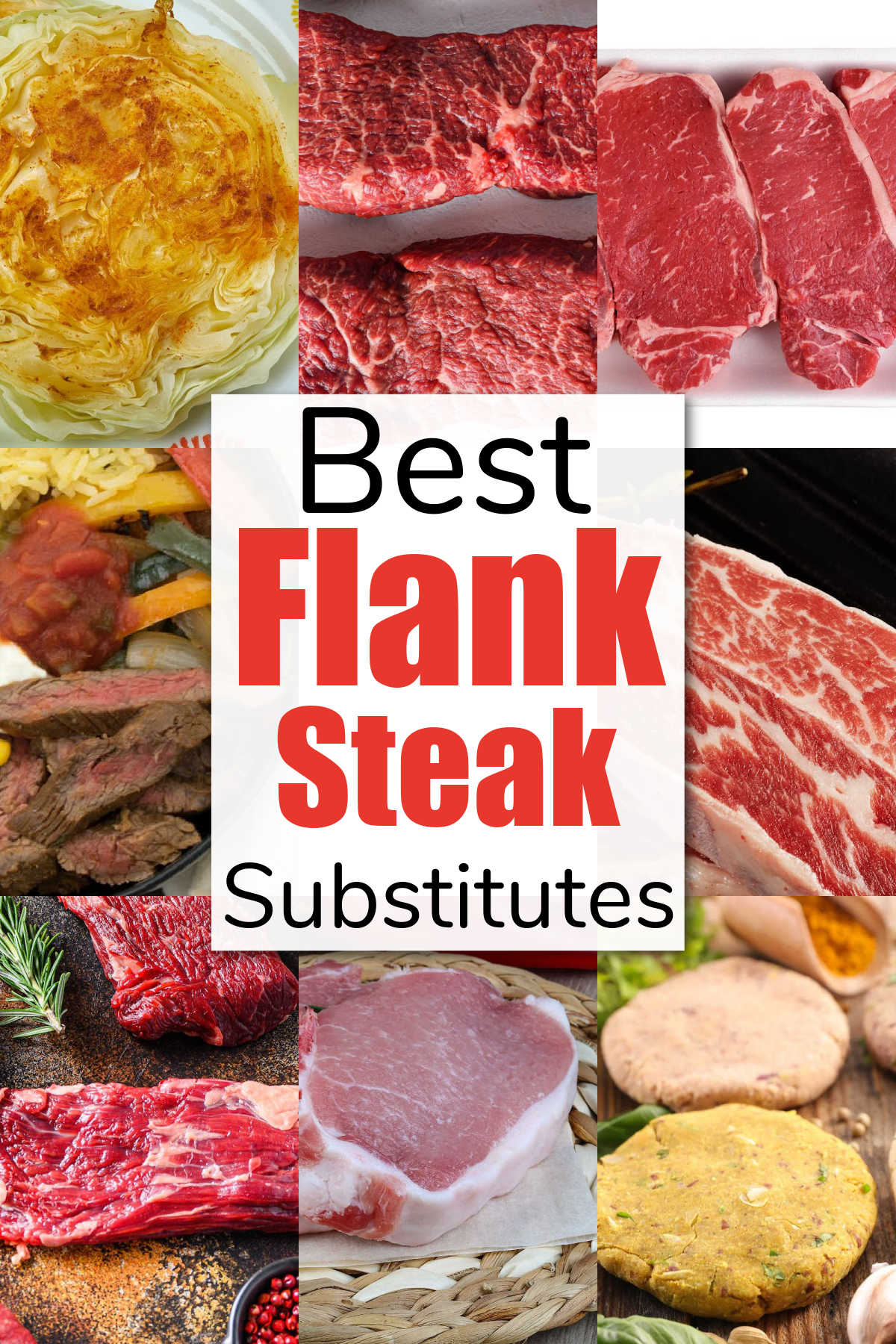 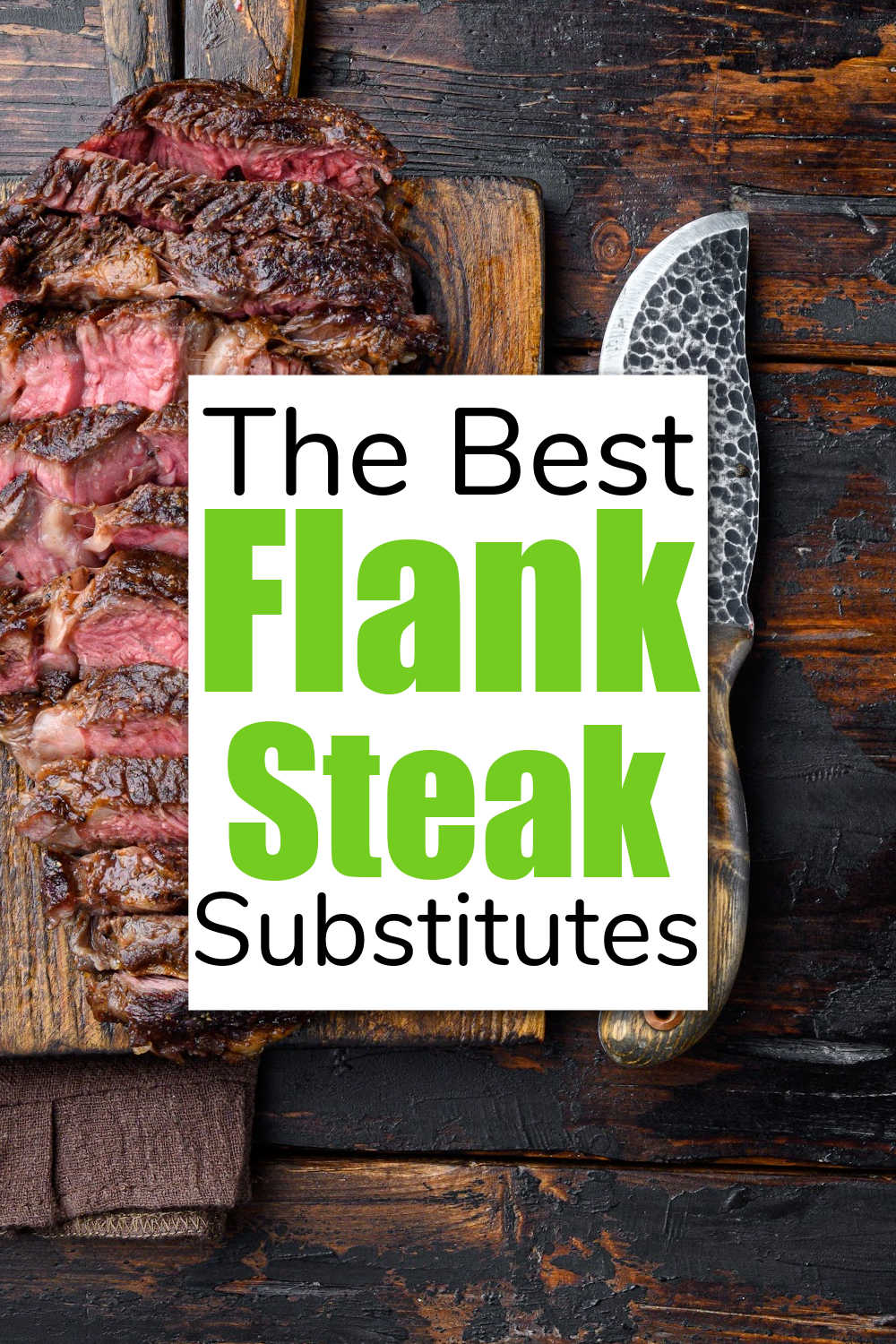