Whether it be an upcoming game day or a fun family weekend at home, these Brisket Nachos spin the classic cast iron skillet nacho dish! Our son said “this is what you expect at a food truck at the brewery!” If that doesn’t say it all, I’m not sure what does!

These smoked Brisket Nachos were part of the series of recipes that I created from the huge brisket that we made a couple weekends ago. We all run into these issues with the larger cuts of meat like brisket or pork shoulder. So much meat, so delicious…but now what do I do with all the leftovers besides just freeze it?

This time I decided I would make a few recipes using the leftovers! Spoiler alert: they were all incredible!

🍽️ Why You’ll Love This Recipe

You’ll just need a handful of ingredients, and it’s seriously one of the best things you’ll ever taste.

Smoked Brisket | Smoked and shredded brisket takes regular nachos to the next level. You may never want traditional nachos again!

Beer | Any variety of beer that you like will work for this recipe. Just make sure it’s something you like on its own to get the best flavor.

Mexican Cheese | Traditional flavored cheese is fine, but we prefer Mexican cheese because it goes so well with the other flavors.

Grill | You are going to use the skillet to cook these over your grill. Use any grill you have. Coleman, Char-Broil, Weber, Big Green Egg or Traeger.

Cast Iron Skillet | You are going to love layering nachos on a cast iron skillet on the grill. When you serve these up, it feels like you are at your favorite tex mex restaurant, just need the margarita.

Measuring Cups | This is pretty optional as a lot of the onions and brisket can be eyeballed but when you want exact, pull out the cups.

Measuring Spoons | Measuring up the spices are needed.

You made your yummy brisket using the Dry Rub Brisket or the Brisket Foil Method or your family’s own favorite brisket recipe and have lots of leftovers, so it’s time to make Brisket Nachos!

Step Two: Sauté an onion in a little bit of olive oil in a cast iron skillet over medium high heat until golden brown. This usually takes 5-8 minutes. Add in the shredded brisket to combine and warm up.

Step Three: Combine the seasoning with the brisket and onion mixture. Stir in the beer to combine. Just smell how good this is!

Step Four: Remove the brisket mixture from the skillet and add it to a bowl. Add in ½ of the cheese and stir until the cheese is melted.

Step Five: Heat oven to 400 degrees. Spray the cast iron skillet with non-stick spray and make a layer of corn chips that covers the bottom of the skillet. Layer ½ of the meat mixture and then add some cheese. Layer some more chips, meat mixture and cheese. Your skillet should be pretty full after two rounds.

Note: It’s difficult to estimate how many chips you should use as it is dependent on the size of the skillet, how much meat and cheese you add and the size and shape of the chips. I used about ¾ of a bag here.

Step Six: Place the skillet in the oven and heat the nachos at 400 degrees for 8-10 minutes or until the cheese melts and turns golden brown. Remove from the oven and top with chives, green onions, jalapeños and any other toppings you like! ENJOY!

This is a great one to tackle! I want to make sure that you all can see there are a lot of ways to address variations in this recipe.

These are ok for leftovers…I do think they are much better served immediately, though. I would hate to have someone come back to me and say “the chips weren’t crispy” and such.

The chips turn soft when served as leftovers, but they won’t be soggy. Microwaving it is fine and it works…we do it because I hate to throw out food. Ideally, make just enough for your family and minimize leftovers.

You will love serving up this finger food for a nail biting game day, Saturday night after a day full of soccer games or as a last minute “I don’t want to cook” night. First thing, pull out the Corona with lime. You have to serve it up with that or homemade margaritas.

Homemade Guacamole in the Blender

Can I make these nachos if I don’t have beer?

Yep! You sure can. You can swap the beer for vegetable, chicken, or beef broth. The flavor will be slightly different, but still tasty.

I don’t have Mexican Cheese, can I still make nachos?

Sure! I prefer the flavor of Mexican cheese, but you can use Monetary Jack or Cheddar Cheese instead.

What are some good topping ideas?

Go wild with the toppings and add all your favorites. Here are a few ideas we enjoy:
Olives
Chives
Jalapenos
Tomatoes
Guacamole
Sour Cream

When using cheese from the bag that is already shredded (like most of us do) the cheese will harden back up quickly because there are additives in the bag to make the cheese not stick.

The fresh “you grated it yourself” cheese is the best. If you want the cheese to really be gooey for a long time, you can use a jarred cheese as it’s runny and doesn’t harden up. 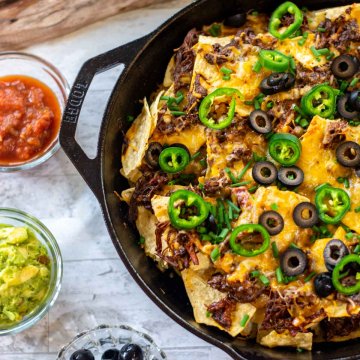 Toppings: Add on toppings of your choice on top. In the photo, we added olives, chives and jalapeño pepper slices.  Cheese Substitution: You can substitute Monetary Jack and Cheddar Cheese with no problem.  Beer Substitutions: You can substitute ½ broth for the beer. You can swap the beer for vegetable, chicken, or beef broth. The flavor will be slightly different, but still tasty. Also look for non alcoholic beer.  Cheese Isn’t Staying Melted: When using cheese from the bag that is already shredded (like most of us do) the cheese will harden back up quickly because there are additives in the bag to make the cheese not stick. The fresh “you grated it yourself” cheese is the best. If you want the cheese to really be gooey for a long time, you can use a jarred cheese as it’s runny and doesn’t harden up 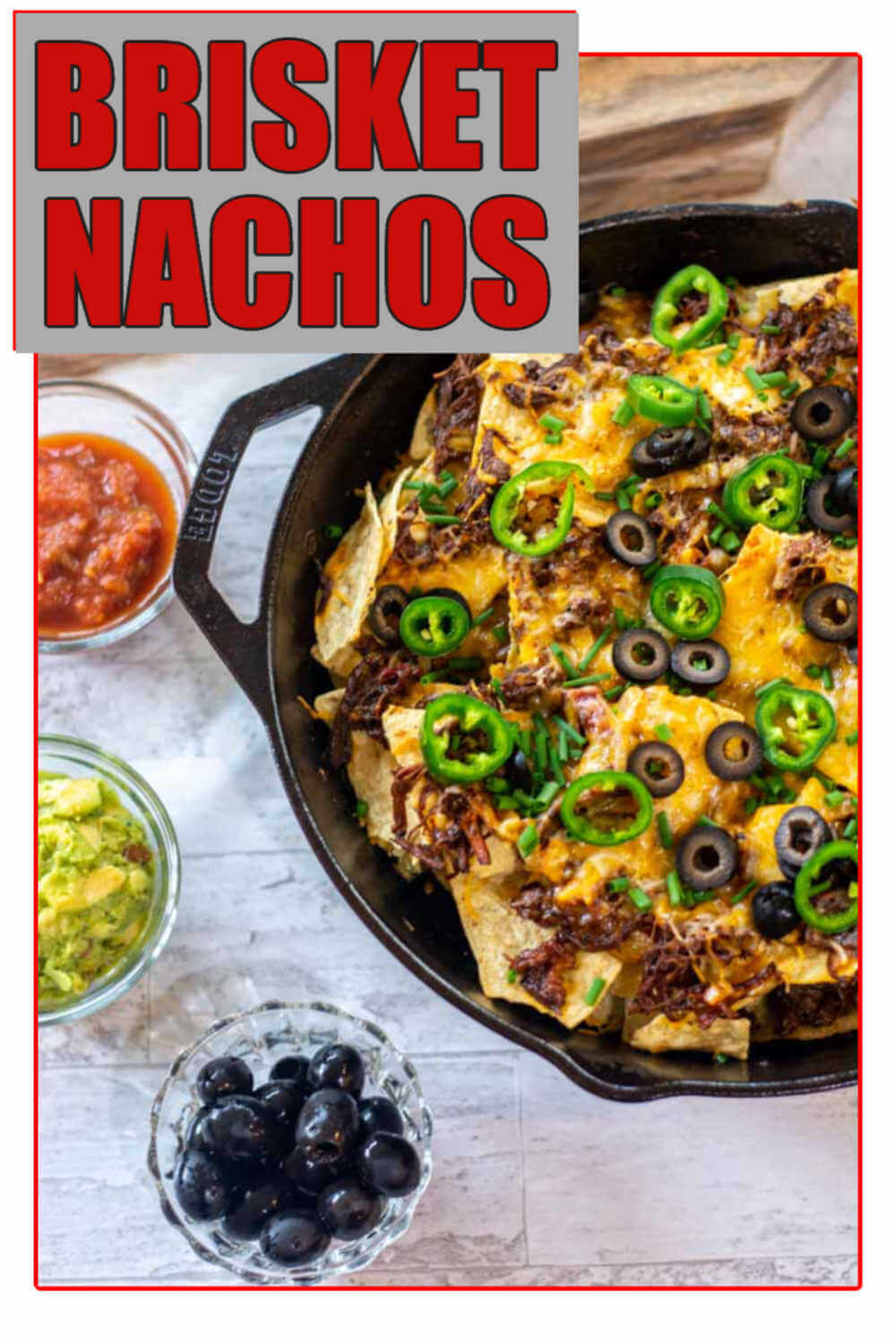 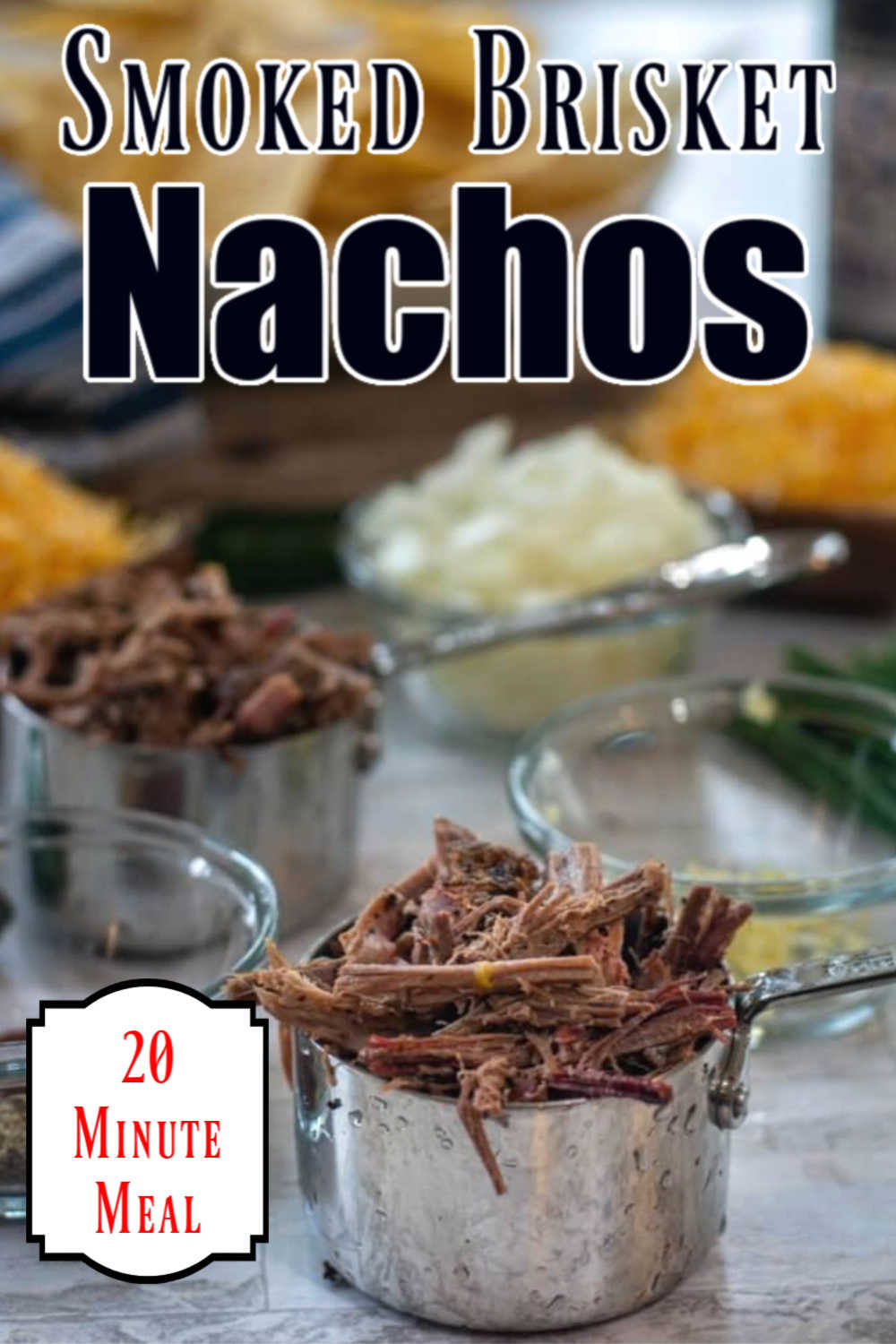