This Smoked Apple Cider Brined Turkey Breast is juicy, flavorful and will be one of your family’s favorites!

I planned on smoking on the grill and prepared a few recipes for the day.  Fresh apple cider was at the farmer’s market and that was my cue to prepare this recipe as I love cider brines. Cue up the Smoked Turkey Breast!

Turkey Breast – I opted for the bone-in version, mostly because it is the most common option at the grocery stores.  Turkey breasts are notorious for drying out.  That is one of my chief complaints when you grill the whole bird. It is much easier to control that when you cook it separately, and when you use a brine.

Brine – I used a fairly traditional brine.  Kosher salt is the agent that penetrates the skin and the meat.  The brown sugar tempers the salt, and the other ingredients provide the fantastic flavors.  In this case, fresh apples, apple cider, cinnamon, and citrus fruits provide a fresh autumn flavor throughout the meat.

Dry Rub – Both the turkey and the brine provide a fairly mild taste that you want to highlight.  So, a strongly flavored rub might overpower the other flavors.  I used a simple five-ingredient homemade rub that complemented the meat perfectly.

Apple Wood Smoking Chips – Smoke is the final flavor that binds this all together.  A strongly flavored wood like Hickory or Mesquite risks overpowering the dish.  I stayed on the mild smoke flavor end of the spectrum by using a mild fruit wood like apple.

This recipe requires a little bit of prep work, but the results are well worth it.

Step One: Cut the apples and your citrus fruits into sections and place them in a bowl. Add the bay leaf, cinnamon, brown sugar and kosher salt.

Step Two: Add the apple cider and water in a 1:1 ratio.  I used two cups of each, which was enough to cover the breast.  Stir the mixture well to dissolve the salt and the brown sugar.

Step Three: Add the turkey breast and make sure that it is fully submerged to allow the brine to do its job.

Step Four: Cover the bowl with Saran Wrap and refrigerate for 8-10 hours.

Note: I prepared the brine before I went to bed and it was ready to go the next morning.  Just make sure you plan accordingly.

This is extremely easy and you probably already have these seasonings in your house.

Step One: Combine all of the ingredients into a small glass bowl.  If you make any substitutions, now is the time to make them.

That’s it!  You can’t get much easier!

Step One: Remove the breast from the brine and place it in a fresh bowl of water for 15 minutes. I agitated the water to loosen any salts that might have stuck to the skin.  This step is critical.  I skipped it once and found the skin was much saltier than I liked.

Step Two: Remove it from the fresh water and pat it dry with a paper towel.

Step Three: Coat the turkey with the dry rub. Make sure you get all the cracks and crevices.

Step One: Set your grill to indirect heat.  For Kamado grills, like the Big Green Egg, install the plate setter.  For gas grills, turn off the burners in the middle.

Step Three: Add the wood chips to the grill.  For Kamado grills, place them on the lump charcoal.  For gas grills, add them to a smoking box.

Note: I say this in all my smoking recipes – a little goes a long way!  A small trickle of smoke is much better than a huge billowing cloud of smoke.  It is too easy to ruin a recipe with too much smoke.  Your food might turn out tasting like ash instead of having that complex hint of smoke.

Step Four: Smoke the breasts until the internal temperature reaches 165 degrees.  That typically takes about 30 minutes per pound.  Because this is brined, it is a little more forgiving with the temperature, but definitely monitor it with a wireless meat thermometer.

The brine is easily customizable.  Have fun with substituting the ingredients for what your taste buds like, and with ingredients you already have in the house.

Try these other classic autumn flavors

If your grill starts producing too much smoke, move the wood chips to the side.  I used my ash tool to get under the plate setter, and it worked great.

The brine adds a lot of juicy flavor to the breast.  That gives a bit of leeway when smoking.  Typically, an overcooked turkey breast will be too dry, but the brine minimizes that risk.  Still monitor the temperature, but know that you have a little bit of a buffer here.

After you remove it from the grill, let it rest for 10-15 minutes before serving.  Allowing it to rest will keep the juices inside the bird, just like you want! 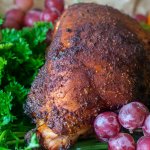 A little smoke goes a long way.  Use a mild wood, like apple.  You do not want a lot of billowing smoke.  That will quickly overpower the brined turkey.  Instead, aim for a slight trickle of smoke. Substitutions: Add some other classic autumn flavors to the brine like cloves, cracked peppercorn, herbs, or star anise.  It is fun to mix and match the flavors for the brine. Always allow 10-15 minutes for the turkey breast to rest once you take it off of the grill. If you do not do this, the juices will run out and quickly dry out. the turkey.  Use a thermometer like the ThermoPro TP20 to make sure that you know exactly when to take the turkey breast off of the grill/smoker. The brine will give it a bit of leeway, it is best to get the turkey breast off of the heat as soon as it reaches an internal temperature of 165 degrees. 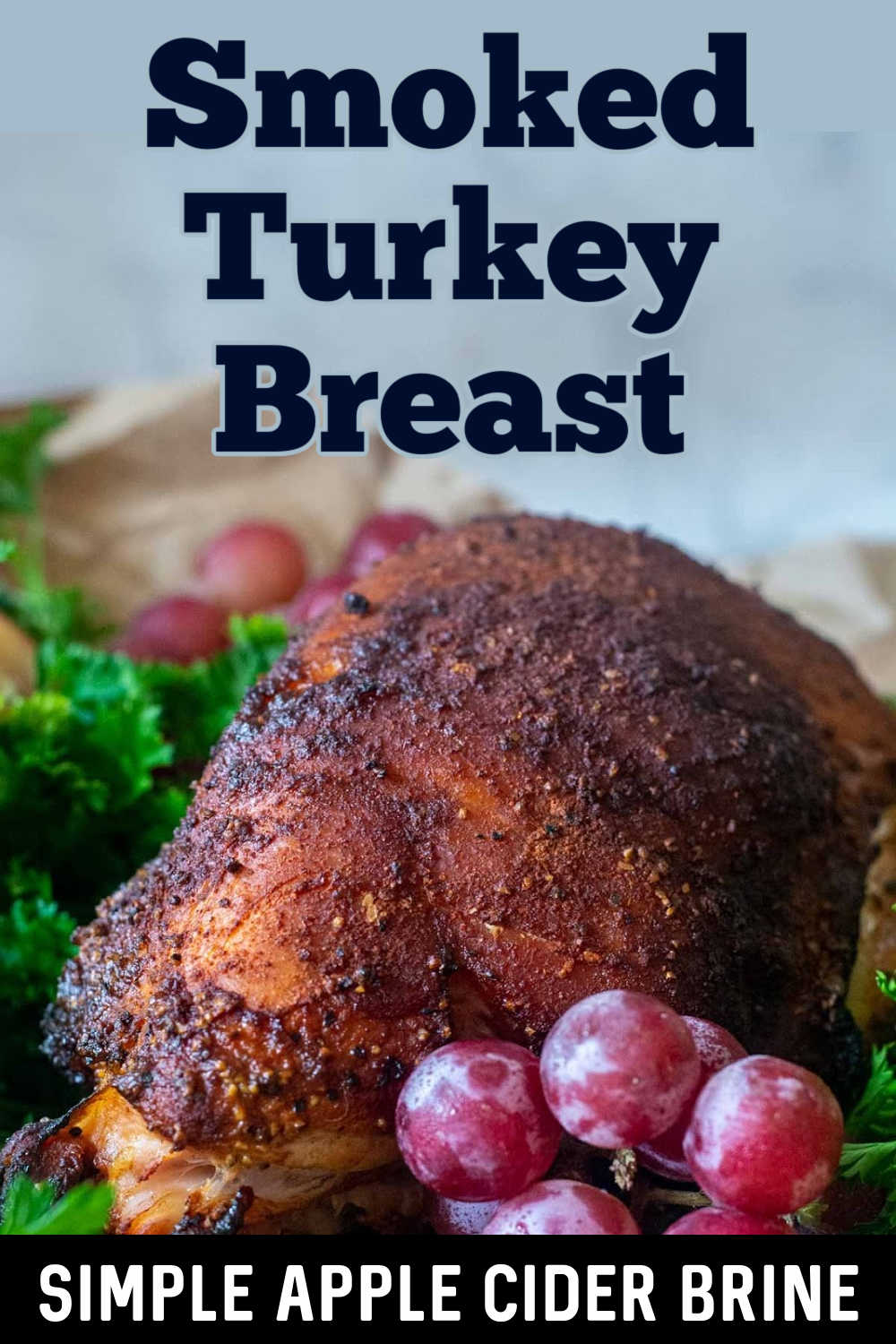 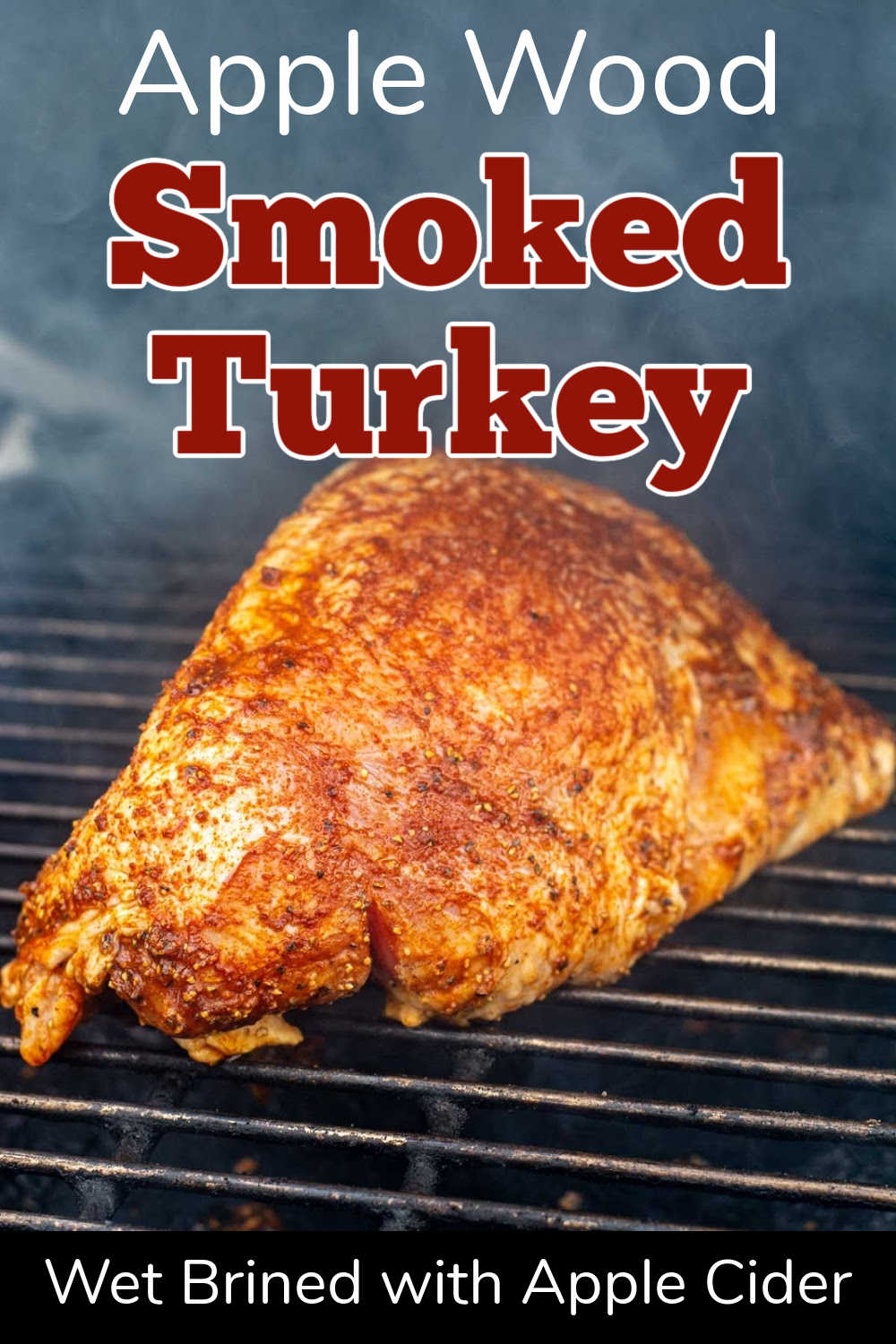