This Brown Sugar Grilled Salmon is my all time favorite meal!  I love salmon smoked, grilled, and baked.  I can’t get enough lox in the morning, but I think there is nothing better than this recipe. Fortunately, it is extremely simple to make in just 20 minutes!

There are only three ingredients in this recipe which makes it one of the easiest ones around.  Add that to the fact that it is grilled, and you really can’t beat it.

My grandmother used this recipe in the oven, broiling the salmon.  It would be a treat on a special Sunday when we visited, and there was never a scrap left over.  I adapted it for the grill and am sharing it with you.

As I mentioned, there are only three ingredients needed to make this amazing salmon recipe.

Salmon | We usually use a whole filet when making this. Using two inch filets will work as well, so always pick up what you can. However you pick out your salmon, reach for a wild caught vs a farm raised as you never know what was used to feed the salmon.

Lemon Juice | Again, the lemon is part of the marinade as well as the glaze. It’s tangy and gives the dish an incredible marriage of flavors.

There are two steps to this recipe: marinating and grilling. That’s it!

You have a choice whether you want to remove the skin or not. I prefer keeping the skin on as it keeps the moisture in the fish and serves as a protective barrier against the heat of the grill.  If there is any sticking, I would rather have the skin stick than the precious meat.

Step One: Marinade the salmon overnight.  Sprinkle the fillets with dark brown sugar and then squeeze lemon juice over it.  Cover with Saran and refrigerate overnight.  By the morning, the brown sugar/lemon mixture will have turned to liquid, letting the salmon marinade in this delicious mixture all night.

Step Two: Combine more brown sugar and lemon in a small glass bowl to serve as a glaze while the salmon is being grilled.

Step Three: Set up the grill for direct heat at 350 degrees.  It doesn’t matter whether you use charcoal or gas. The key is to get a stable, direct heat.

You can lay the fillet straight on the grate, but it risks having the juices drip into the coals and creating an acrid smoke flavor.  Instead, I use copper grill mats.

If you haven’t tried these before, go grab some.  These are game-changers for my grilling.  Nothing sticks to them.  I mean NOTHING! Trust me, I have tried the gnarliest, stickiest recipes I can think of and I can’t get anything to stick.  I love them! We have a great How to Use a Copper Grilling Mat post here to learn all about it.

Step Four: Lay the salmon on the copper grilling mat on the grate and let it grill for five minutes.  After five minutes, baste the salmon with the brown sugar and lemon glaze.  The glaze will add an extra mild sweetness to the surface of the fish and lock in the juices to make the fillet extremely tender.

Step Five: Reglaze the salmon every five minutes until it is done.  It took my thicker fillets 20 minutes to cook fully through.  The thinner fillets were done in 15 minutes.  Everyone’s grill is slightly different so keep an eye on your food!

Note: This glaze will cover the flesh of the salmon and drip on to the copper mat where it will darken.  Don’t worry about it.  Remember when I said the copper mat won’t let anything stick to it?  That’s the case here.  Even burnt sugar won’t stick.

If you use a fork to look at the inside of the fish, the meat will have turned from translucent to opaque.  You might see the white stuff (which is coagulated protein, and perfectly safe to eat) rise to the surface.  If you basted the salmon, it will not be as prevalent.

You do not need to flip the salmon on the grill when you are using a copper mat.  If you are using a skinless fillet, you might consider using a fish grill basket.  Using a basket makes it easy to evenly grill both sides.

If you are using a long fillet, consider cutting it in half or thirds so it will cook evenly.

Don’t worry if the skin is left on the salmon, once you cook it, it simply peels off so it’s not worth the effort to fight with it when it’s raw.

I usually eat the salmon fresh off the grill.  I have chopped it up and placed it on a bed of spinach for a delicious sweet brown sugar and lemon salmon salad.

Or, you could stand at the end of the counter like my son and eat it before it can even be served on anyone’s plate!  I will take that as a thumbs up from the official Kitchen Laughter taste tester!

Are you supposed to flip salmon on the grill?

No, you don’t have to flip the salmon when it is cooked on the grill. It’s best to use a copper grilling mat to prevent sticking and flare-ups from the marinade. The salmon needs to be cooked skin-side down for best results.

When is the salmon done?

When the internal temperature reaches 145 degrees F, the salmon is done. It should flake easily with a fork too. If it’s overcooked, it will get rubbery and won’t taste as good. 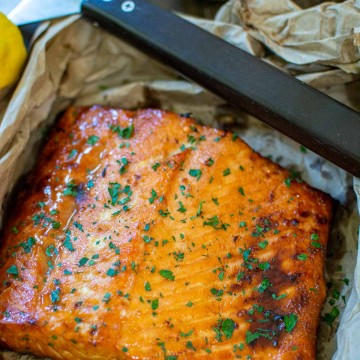 Oven Option: As an alternative, broil the salmon in the oven if you aren’t able to grill it.  It will turn out delish! Flipping Salmon: No, you don’t have to flip the salmon when it is cooked on the grill. It’s best to use a copper grilling mat to prevent sticking and flare-ups from the marinade. The salmon needs to be cooked skin-side down for best results. Temperature Check: When the internal temperature reaches 145 degrees F, the salmon is done. It should flake easily with a fork too. If it’s overcooked, it will get rubbery and won’t taste as good.