Looking for ways to beat the stall when smoking or grilling large meat cuts? The Texas crutch is a popular method of wrapping the meat in foil or butcher paper for a while to speed up the cooking process while keeping it moist.

Can you smoke meat without using the Texas Crutch? How do you know when it’s time to wrap the meat? Will wrapping affect the texture and flavor?

We’ll discuss the Texas crutch method below and explain exactly how it works. If you decide to use it, your smoked meat will turn out amazing!

What Is The Texas Crutch?

The Texas crutch, supposedly originating from Texas, is a method of wrapping large cuts of meat such as ribs, pork butt, and beef brisket in aluminum foil or pink butcher paper after grilling/smoking uncovered for a while to shorten the cooking time and prevent the meat from getting too dry.

When wrapping, a small amount of liquid, such as water, apple juice, wine, or beer, is often added to keep the meat moist during smoking or grilling.

Large cuts of meat rich in connective tissue are better suited for low and slow smoking. What happens is the temperature of the meat reaches a plateau after the first few hours or smoking, a phenomenon known as “the stall”.

This is when the Texas crutch may come in handy. Wrapping your meat at the right time will shave off hours of the total cooking time!

What Is The BBQ Stall?

The barbecue stall occurs when a large cut of meat such as pork butt or beef brisket is smoked at low temperature after 2-3 hours when the internal temperature of the meat reaches somewhere between 150-160°F using a meat thermometer. We love the Thermopro Stick version for a quick read and the Thermopro Wireless with the Dual Probe so I can set the temp I want into 2 different pieces of meat and it will alarm when the temp is reached.

At that point, the temperature will remain constant for 2-6 hours, with 4 hours being the average. It seems like cruel sorcery, right? Well, it’s not, so let’s get to the science!

As the meat temperature rises, some of the liquid trapped inside escapes to the surface and evaporates, effectively cooling the meat while it’s cooking.

The temperature starts to rise again once the evaporative cooling ends.

How long the stall lasts depends on various factors, including the size, shape of the cut, the internal composition of the meat, airflow, and even the humidity outside.

How To Use The Texas Crutch Method

Do you have to use the Texas crutch to shorten the stall? Not necessarily. You can just wait it out.

The stall is particularly frustrating because you never know exactly how long it will last.

Enter the Texas crutch, which is far better than leaving your plans for dinner to random chance. Here’s how to do it:

How do you know it’s time to crutch? Monitor the internal temperature using a meat thermometer. When it hits the 150-160°F range, the stall will begin.

From then on, you can wrap the meat at any time, although you might want to wait longer for the bark to form.

When the outer crust and color of the meat is to your liking, it’s time to wrap it.

What should you wrap the meat in? You can use aluminum foil or pink butcher paper (more on that later), or a combination of both, like we did for our smoked brisket.

Place the meat on two layers of foil, lift the sides a bit, and add 1/4 cup (60 ml) of liquid to the bottom of your wrapping.

Now it’s time to seal the foil as tightly as possible, including around the thermometer probe.

Return the wrapped meat to the smoker and allow it to continue cooking until it reaches your target temperature or unwrap it as soon as it gets past the stall and let it cook unwrapped if you want the bark to crisp up again.

Last but not least, any large piece of meat should be allowed to rest for 30-60 minutes in loosely tented foil before serving.

This will allow the internal juices to redistribute so you can enjoy the most tender meat ever!

Larger cuts of meat rich in connective tissue and/or fat take the longest to cook and, as a result, are most suitable for using the Texas crutch method to beat the stall.

Slow cooking at low temperatures is the best way for large meats to tenderize. With the Texas crutch, not only the cooking time will be shorter but it will also keep the meat moist.

Here are the most popular cuts where the Texas Crutch method is used:

The Texas Crutch – Pros And Cons

Still on the fence about the Texas crutch? Here’s an overview of all the benefits and potential drawbacks so you can have an easier time deciding if it’s the right method for you or not.

How do you stop the stall when smoking meat?

Your first option is to do nothing and simply wait for the stall to pass. The longer cooking time will allow the meat to get a deeper smoky flavor.

Increase the temperature. Contrary to the “low and slow” method, cranking up the smoker or grill as high 350-400°F is often used by professional pit masters to power up through the stall.

For our smoked brisket, we did it the other way around. We set the temperature at 400°F for the first 2/3 of the total cooking time and took it down to 275°F after crutching. Despite the fleeting nervousness, the brisket turned out amazing, with an excellent bark!

Keep a humid environment to avoid evaporative cooling. You can do that by either placing a water pan in the smoker while the meat cooks unwrapped or by spritzing it with water every hour. This will also help form the outer bark, as the smoke will cling better if the surface of the meat is moist.

Wrap the meat in aluminum foil or pink butcher paper to stop the surface evaporation and shorten the stall.

Should I Wrap Meat In Foil Or Butcher Paper?

This depends entirely on your personal preference. Aluminum foil will seal the meat more tightly and keep it soft while it cooks.
Pink butcher paper is naturally porous, so the meat will be less soft compared to foil-wrapping but also smokier.

The foil will give you the fastest cooking time. Wrapping the meat with butcher paper will also significantly speed up the cooking and help you beat the stall.
The second option is better if you’re looking for the most intense smoke flavor.

What Liquid Should I Use For The Texas Crutch?

Water, broth, apple juice, pineapple juice, apple cider vinegar, beer, and wine are all excellent options to use when crutching meat and they work well for spritzing too.
You can also experiment with other fruit juices depending on the type of meat you’re smoking.

Back in prehistoric times, people mainly cooked food over open fire and naturally, they discovered smoking makes it taste better. We wholeheartedly agree!

They also wrapped meat in various types of leaves to protect it from high heat. This concept is as old as can be.

In modern days, we’re getting more technical with smoking meat and the Texas crutch will let you easily customize the texture and flavor of your meat, as well as speed up the cooking.

Don’t be afraid to try it and keep experimenting. Smoking and grilling can be a never-ending adventure! 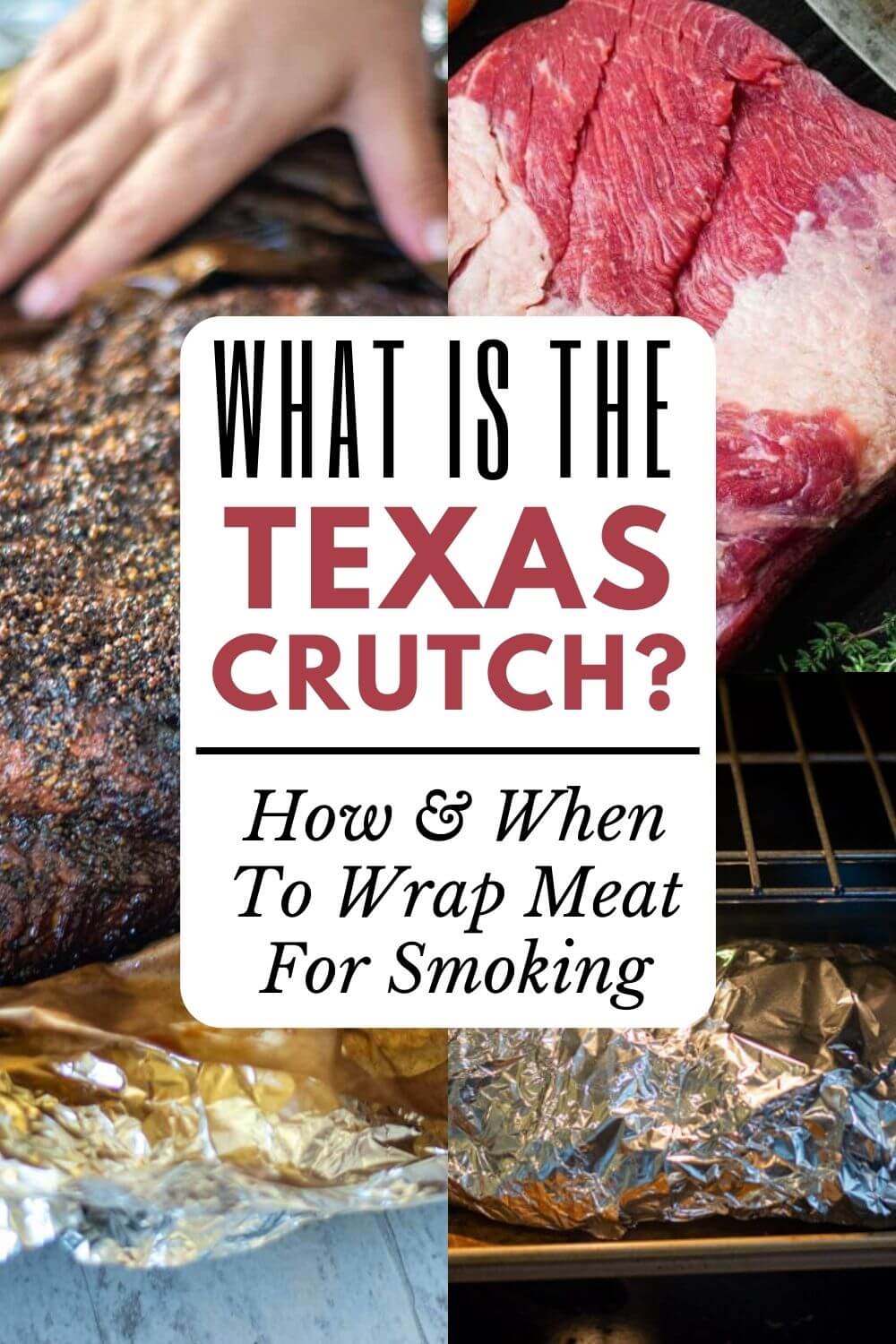 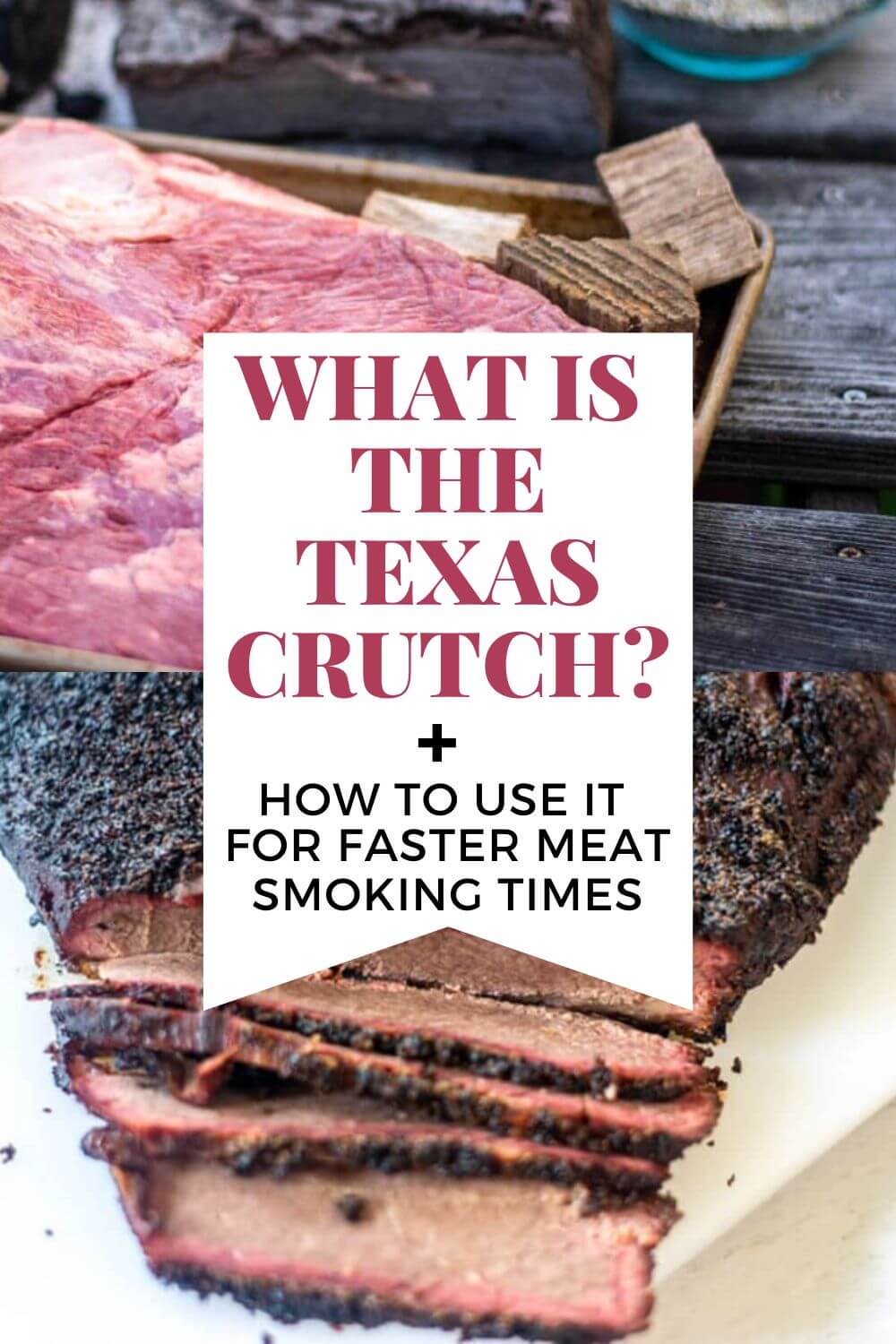