Grilled Potato Skins loaded with cheese and bacon are grilled in 10 minutes. It is perfect for baking the potatoes earlier in the day and grilling at game-time!

The snow hit hard in our area this weekend, and we were getting nervous that we wouldn’t be able to grill our Over the Top Amazing Grilled Potato Skins for the upcoming playoff games. Our grill is currently covered with 9 inches of snow, so we are going to have to start digging it out. Have you ever had your lid frozen shut? We have and passed on some handy tricks in that post.

Tailgate-related food is some of my favorite as we watch the games. We came from a smaller town in Washington state where football is incredibly popular and people live and die by the high school games. There is still part of that feeling inside of us! Yes, we still root for the Seahawks even though we also cheered on the good old Cleveland Browns when we lived in Cleveland. What can I say? We love a good underdog!

We decided to expand our tailgating menu to include the Grilled Potato Skins which our son declared as “the best thing we have ever grilled!” These have a very mild grilled flavor that takes the normal potato skins to a different – and even more yummy(!) – level. They are only on the grill for a short amount of time so the flavor is definitely more “grilled” than “smoked” for this recipe. It lends itself to a good party on the deck with friends that aren’t as into the smoky flavor as we are!

We like to bake our potatoes in the oven prior to grilling.

Step One: Wash the potatoes and poke a few holes in them with a fork. Brush them with olive oil and then sprinkle them with coarse-ground sea salt or Kosher salt.

I made the mistake of using finely ground salt once and the potato skins were way too salty!

Step Two: Wrap them in aluminum foil and bake them in the oven at 400 degrees for 60 – 90 minutes. The time will vary depending on the size of your potatoes.

Note: You can microwave these in a pinch, but you will lose a bit of flavor, and you won’t get that crispy skin.  If you have the time, definitely bake.

Step Three: After they are cooked, allow them to cool. Slice them in half lengthwise and scoop out the center of the potato, leaving about ¼ of an inch around the outer skin. Reserve the inside of the baked potato for other dishes.

Step One: Heat the grill to 325 degrees.  I used the GrillGrate on my Big Green Egg, but you can keep the potato skins straight on the grating with direct heat.  It won’t be on that long, so you won’t need to worry about burning.

Step Two: Place the scooped out potato halves on the grill with direct heat for five minutes. Add cheese and bacon to the potatoes and grill for an additional five minutes. They should be nice and bubbly.

Step Three: Remove them from the grill and add green onions, sour cream and even some butter to make them fully loaded.

Serve them immediately.  In our case, a couple of them were snatched from the serving tray before it even made it back to the kitchen!

Grilled Foil Wrapped Sweet Potatoes – As easy as one-two-three, these “baked” sweet potatoes are perfect for a lower carb alternative at your BBQ.

Smoked Fingerling Potatoes – OMG! I am in love with smoking potatoes. The fingerling spuds are smaller, so they don’t take as much time, but what a fun treat (especially when topped with butter and garlic!)

Brisket Twice Baked Potatoes – I topped my twice baked potatoes with some leftover smoked brisket and turned these into a meal, all on its own. 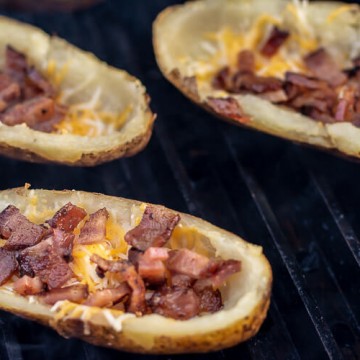 These Grilled Potato Skins Recipe are super easy to make, spending just a few minutes on the grill. I bake the potatoes ahead of time, and then turn this into a 15 minute meal.
No ratings yet
Print Pin
Course: Side Dish
Cuisine: American
Prep Time: 1 hour 30 minutes
Grilling Time: 10 minutes
Total Time: 1 hour 40 minutes
Servings: 8 people
Calories: 117kcal
Author: Jason

Each 1/2 of potato is one serving.  Top the potato skins with other toppings like olives, guacamole, taco meat, onions or tomatoes.  This recipe easy to prep ahead of time. Cook the potatoes the day before and scoop out the middle. Cover and put in fridge until 20 minutes before you grill. 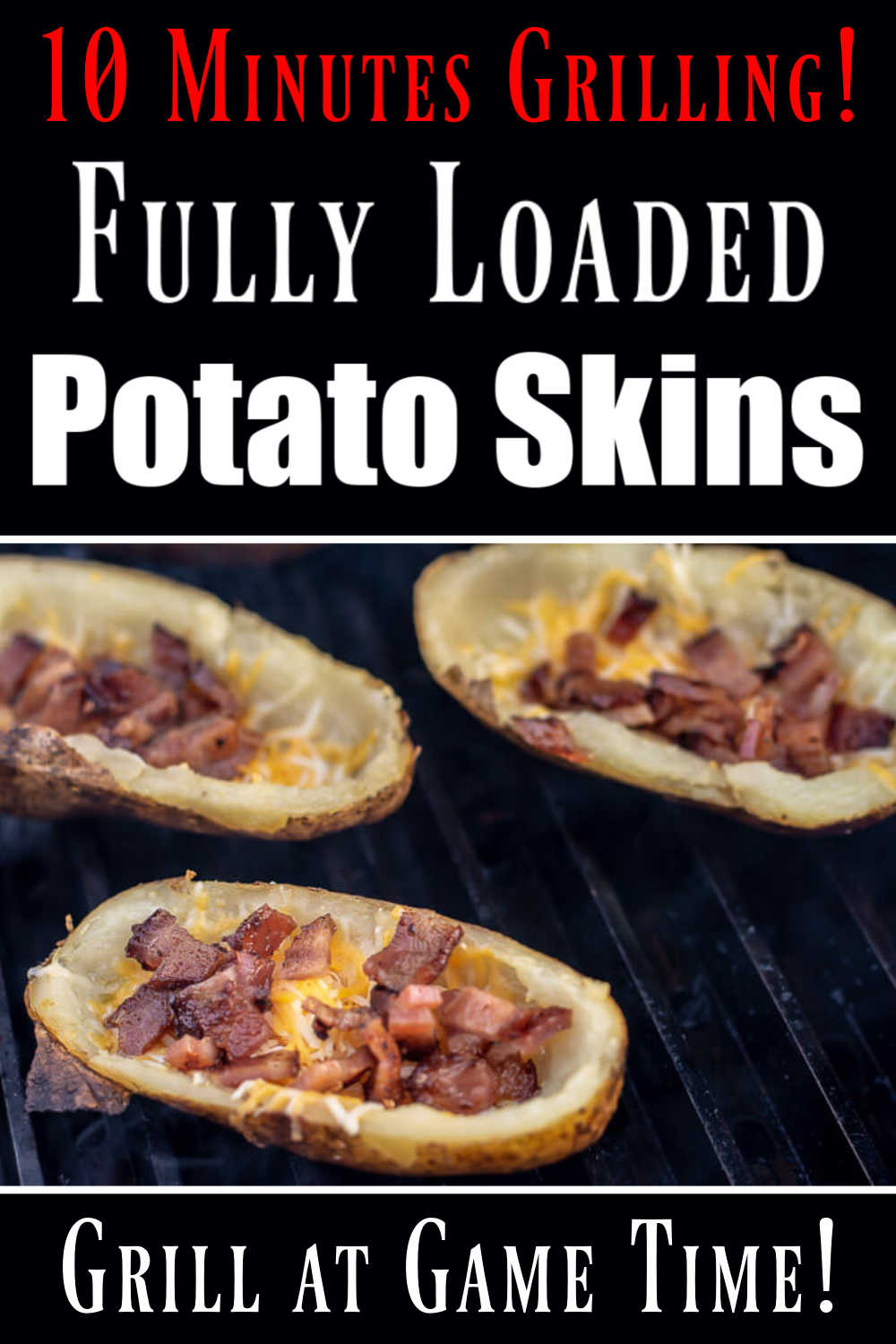