It was a dark and stormy night…

That’s how every good story starts, right? Well, it really was a dark and stormy night in the winter. I had a nice pork belly that had been curing for a week and Sunday was the day I was going to smoke it on the egg. Delicious, home cured bacon was just a day away. Unfortunately, I was about to find out that my Big Green Egg lid was frozen shut!

Contents hide
1 Has It Happened To You?
2 Using a Hair Dryer to Thaw the Gasket
3 Setting a Small Fire in the Bottom Vent
4 Dropping in a Lit Firestarter
5 Alternative Techniques to Free a Stuck Lid
6 The Key is Effective Prevention
7 Using A Grill Cover

On Saturday night, I spent some time to prepare the grill. I cleaned out the old ashes, refilled the charcoal, soaked the wood chips, found the fire-starter and the lighter, and got the tray ready to take the pork belly out in the morning. In just a few short hours, a nice, smoky slab of bacon would be beckoning me to a taste test!

Temperatures were going to be below freezing that night and into the next day, but I have used the BGE in the cold before, so it wasn’t a big deal.

Or so I thought.

The next morning, I woke early to start the smoke.  I took my tools outside, and lifted the lid of egg.

Or rather, I tried to.

Has It Happened To You?

The lid didn’t budge. What the heck?

That was the first time I have ever had the lid freeze in place. A good strong yank would break it free, right? Nope.

Sure enough, a light rain the night before left enough moisture around the seal that the cold temperatures caused it to turn into ice.

What to do? A quick search of internet forums made me feel a bit better. This was fairly common. I tried several recommendations:

Using a Hair Dryer to Thaw the Gasket

My wife gave me some strange looks when I took her hair dryer and started using it to heat up the seal. I explained that the Big Green Egg lid had frozen shut.

The hairdryer didn’t work. As one area warmed up and I moved to the next, the first section quickly refroze. I am sure my neighbors thought I was weird.

Setting a Small Fire in the Bottom Vent

Dropping in a Lit Firestarter

The option that ended up working was to drop in a lit firestarter from the top vent and force it through the stainless steel cooking grid and on to the charcoal using the ash tool. It took some effort, but I finally got the fire-starter pushed through to the lumps. It took a good 30 minutes for the charcoal to light, and the heat to raise enough to melt the frozen seal. Victory!

With the lid moving freely, I added the wood chips, adjusted the vents and put the pork belly on for its smoking. That evening we enjoyed a nice, thickly sliced smoked bacon. It was phenomenal!

The Key is Effective Prevention

From that point on, when temperatures were expected to drop below freezing, I would wedge the grill top open the night before using a rolled up paper towel. It lifted the lid just enough to create an air gap and prevent the Big Green Egg from freezing and sealing the lid to the base. It works like a charm, but does require a bit of foresight.

That is the easiest tip I have found to stop the dreaded freeze-shut issue. Trust me, it takes 30 seconds to roll up a paper towel and place it, but it can be a very long and frustrating process to unfreeze the seal when you need to get the grill started the next day.

Another option is to use the BGE covers. These are waterproof covers that will prevent moisture from reaching the egg at all. I haven’t used these in a while, though. I use the Big Green Egg so often, that it seems as soon as the egg cools down and I can put the cover on, that I am taking it back off to cook again.

Additionally, if I go a week or two between grills, insects will take advantage of the protected space underneath the cover. I can’t tell you how many times I have lifted off the cover and watched spiders and other creepy-crawlies come scurrying out. Yuck! 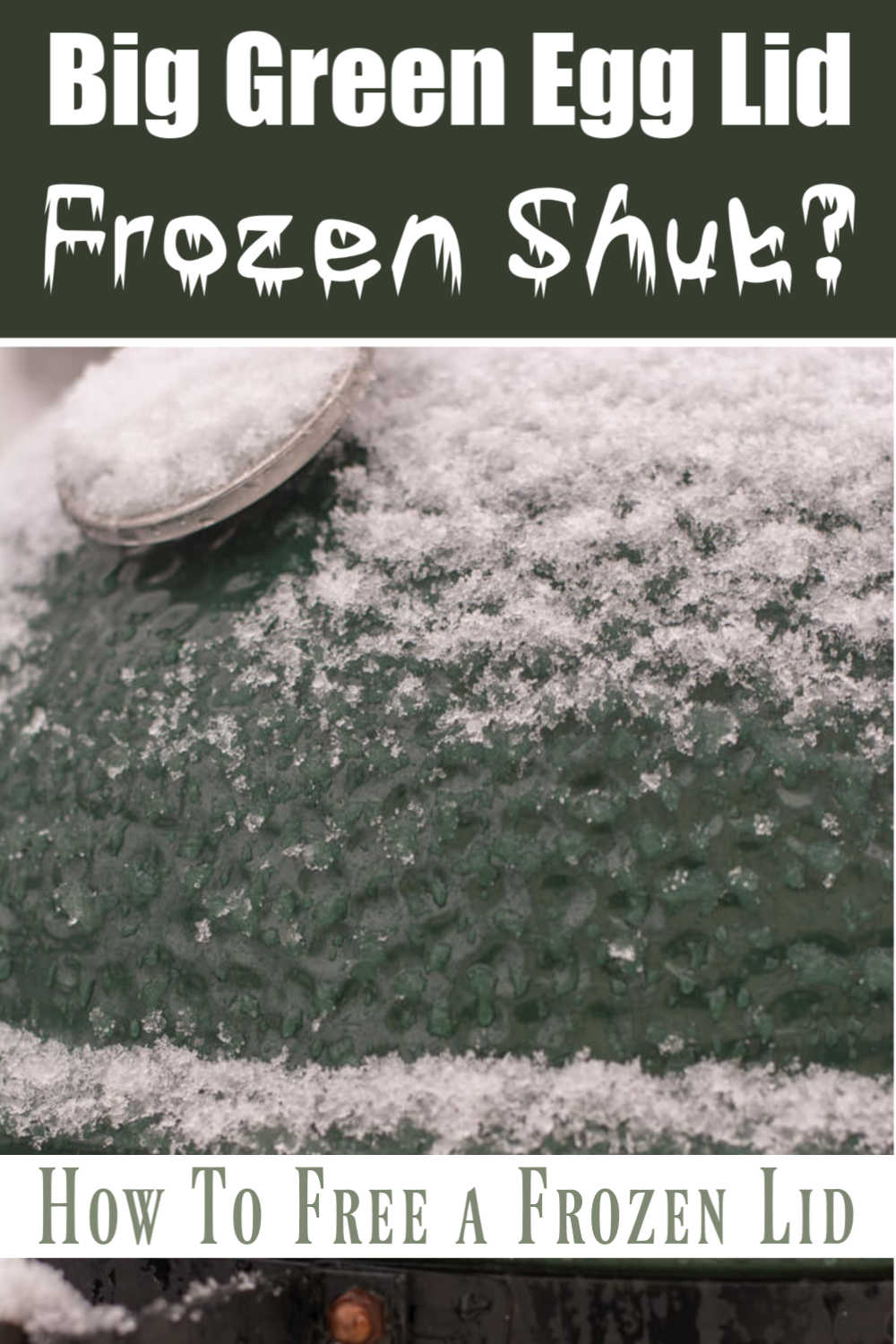