These Cast Iron Skillet Pulled Pork Nachos are our family’s “go to” meal when we want a fun dinner, but don’t want to spend a ton of time in the kitchen.

Spence is on a homemade nacho kick right now and thinks he has perfected the Loaded Cast Iron Skillet Pulled Pork Nachos recipe.

Yes, he is a teenage boy that cooks! (Too bad that we can’t get him to clean his room – we have to pick our battles!)

He was more than happy to cook the pork version of this loaded nachos recipe – and lo and behold, it turned out AMAZING!

He used the meat from Jason’s grilled pork shoulder.  Jason grilled almost 5lbs of pork for less than $10 and I love to see how far can I stretch those large grilled meat dishes.

This recipe only needed about ½ lb of the pork and it fed all three of us with a good-sized serving left over.

Step One: Sauté 1/4 cup of onion in a little bit of olive oil until it is translucent. Add pulled pork, taco seasoning and water to the cast iron skillet. Heat thoroughly.

Step Two: Remove the mixture to a bowl and mix one half of the cheese into the hot taco seasoned pork. The cheese will melt and mix in with everything else.

Step Three: Clean out the skillet. Heat your oven to 500 degrees and put the empty cast iron skillet in for about five minutes, until it is extremely hot.

Step Four: Remove the skillet and turn the oven down to 450 degrees.

Step Five: Assemble the layered nachos. Be careful as the pan is extremely hot! Layer the chips along the bottom, topped by 1/2 of the pork, and more cheese.

Step Seven: Add the hot skillet back into the oven for 8-10 minutes. The cheese should be melted over the nachos.

This is going to go down as one of our fastest meals to make because we are using pre-grilled pork.  This recipe is virtually a “heat-up-and-eat!”

I’m also all about prepping for my meals well in advance. So, here’s the deal, this entire meal can be prepared in 10 minutes, and cooked in the same amount of time.

Note: Reheating leftovers of this recipe isn’t ideal.  The flavor is great, but the chips get a bit soggy.  Fortunately, Jason and Spencer refer to themselves as “walking garbage disposals” and will eat virtually anything, so we didn’t waste it!

When making and prepping for your family’s Pork Nachos, think of the ingredients that your family loves. Jason and Spencer love olives, but I have friends who just can’t stand them. This recipe is customizable for even the pickiest of eaters.

I’ve listed what Spencer added, but take the reins on this one and add your family’s favorites…just make sure to use the pulled pork you grilled!

Until next time, enjoy! 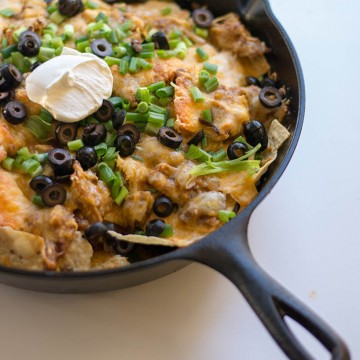 Starting with a hot skillet is key.  Since the layered nachos are only in the oven for ten minutes, you want the mixture to be heated through.  We have tried this without heating the skillet and it just doesn’t work as well. 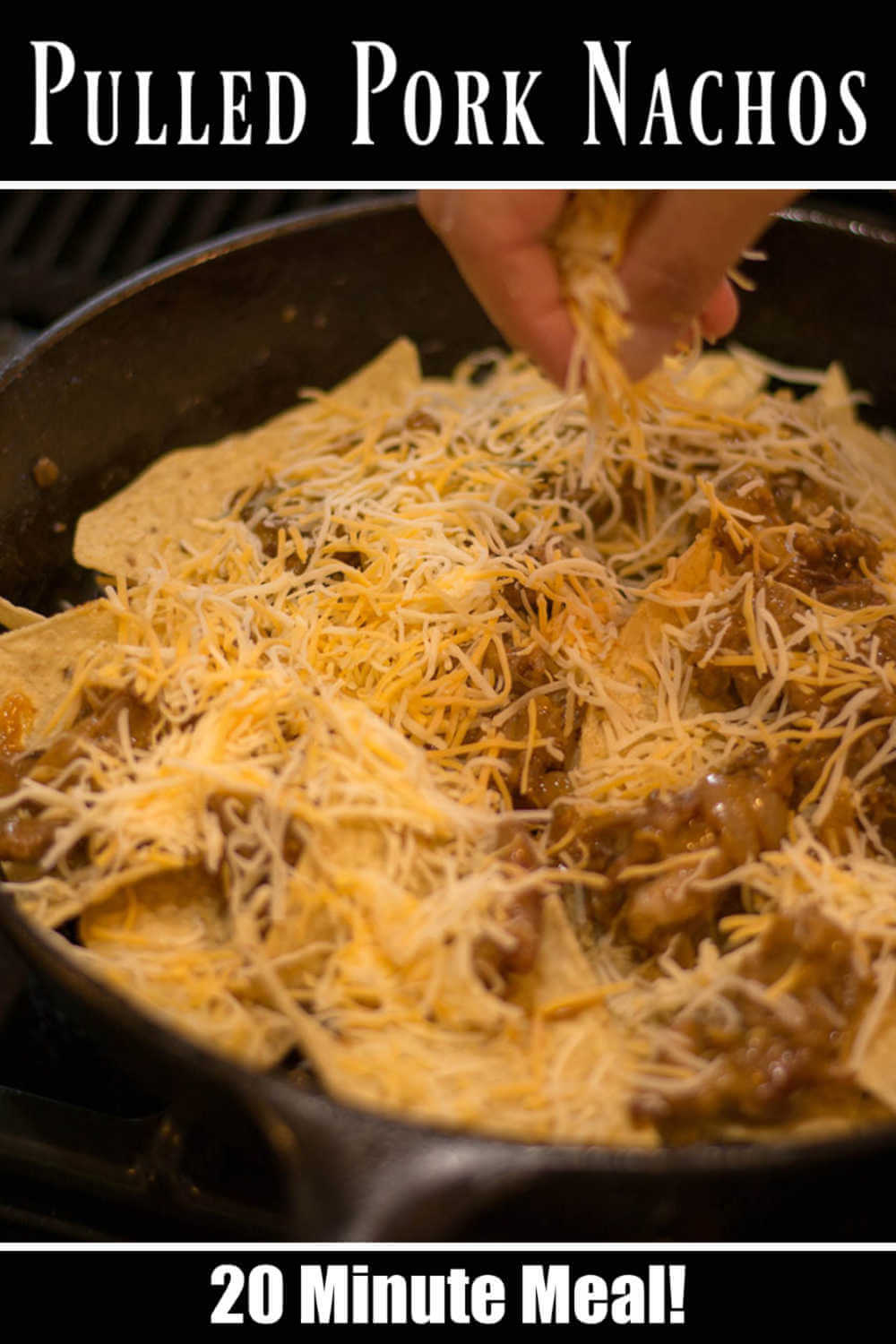