These Brisket Twice Baked Potatoes are so easy to make and always a family favorite! Stuffed with potatoes, cheese and leftover brisket make these filling meals all on its own.

I love traditional twice baked potatoes loaded up with all the ooey gooey sour cream, butter and cheese! Admittedly, they are generally saved for special occasions, but now I’ve got a reason to make them more often!

I took this classic recipe and put a spin on it by changing up the cheese using Fontina and Parmesan so that they wouldn’t compete with the stronger flavor of the smoked brisket. I do think that I would have been safe using cheddar or gruyere here as well. This is a great recipe to make using that leftover brisket from the weekend.

Brisket | I smoked a fairly large brisket using a technique that involved cooking at a higher temperature, wrapping in butcher paper and foil, and then slow cooking it until it was tender.  I couldn’t believe how well it turned out, and I will probably not go back to the way I used to cook briskets.  This is definitely my new favorite approach.

Don’t miss out on learning how to smoke a brisket as this will get you a great jump start on smoking one of the most popular meats.

Baker Potatoes | I love using these larger russet potatoes when making twice baked as everyone get a really large serving.

Fontina Cheese | This is a semi hard cheese that is a little pungent mixed with a little sweetness that produces a creamy texture when using it in recipes. Substitute your favorite cheese that you like to enjoy for twice baked.

These are so easy to make and the biggest drain on your time is waiting for the baked potatoes to cook. Seriously, it seemed like it took forever as I could barely keep my hands off of the meat.

Step One: Bake the potatoes. I like to clean mine, poke 3-5 holes in them, rub them with olive oil (or the Olive Oil Spray – have you used it yet? I’m addicted!) and then sprinkle kosher salt on them. I like the crispy skin as our family likes to eat it all.

Step Two: Once the potatoes are done, cut them in half and remove the center of the potato while leaving about ¼” of potato and skin (see photo for detail). If you don’t do this, then the potato falls apart and it becomes a complete mess.

Step Three: Mix the scooped-out potato with the cheese, half and half and butter. Spoon back into the potato skins. Top with shredded brisket.

Step Four: Place the brisket twice baked potatoes back in the oven for fifteen minutes.  Remove and serve!

Tip: The great thing with this recipe is how versatile it is! You can make it with one potato or six. If you only have one cup of shredded brisket, make these anyways and just have a little less brisket on each potato. No big deal there. If you do that, maybe mix it up and do the cheddar cheese so the flavor pops back up a bit.

These reheat extremely well and were wonderful the next day. They didn’t lose any flavor, even in the microwave. The cheese continued to melt with the potato and it was great!

How do you store leftover potatoes?

Cover the leftover twice baked potatoes with a piece of plastic wrap or tin foil. Then place in the fridge for 4-5 days.

They can also be stored in a large freezer-safe bag and frozen for up to three months—Thaw in the fridge and reheat in the microwave or oven.

How do you know when a baked potato is ready?

When baking the potatoes, you’ll need to test if it is fully cooked. The easiest method is to take a fork and insert it through the skin. If it easily glides into the potato, then it’s done. If it’s hard, then it needs to bake a little bit longer.

Can I use different meat for these potatoes?

Yep! Pulled pork or barbecue chicken are pretty tasty options as well. You’ll need to cook the meat ahead of time and follow the directions for the rest of the recipe. Enjoy! 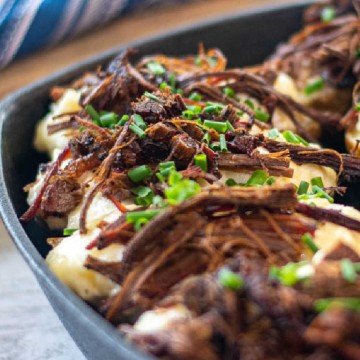 For Baking the Potatoes

Cheese: Mix up the types of cheese for great results. I kept it mild, so the flavor of the smoked brisket popped through. Cheddar works great here too. Or use whatever cheese you usually use in your twice baked potatoes.  Garlic Option: Add minced garlic to the potato mixture for a fun addition. Garlic makes everything taste better, right? Don’t be tempted to add salt and pepper as there is more than enough on the crust of the brisket.  Over mixing: Make sure to not over mix! The potato mixture will be sticky and won’t have a smooth texture. This is the time to leave it alone.  Russet Potatoes: Make sure to use the good ol’ russet potatoes. These potatoes go through a lot and you need them to be able to handle it all. Remember the tip above of leaving a little bit of the potato meat on the skin? Russet potatoes make it really easy to hold together.  Adding in Half and Half Last: Sometimes the cheese and butter will be enough to get that rustic, thick texture and sometimes you will want just a couple tablespoons of half and half. Don’t throw it all in and hope for the best here. Slow and gradual are the key to the game. Storage: Cover the leftover twice baked potatoes with a piece of plastic wrap or tin foil. Then place in the fridge for 4-5 days.  Freezer Friendly: Store in a large freezer-safe bag and frozen for up to 3 months—Thaw in the fridge and reheat in the microwave or oven. 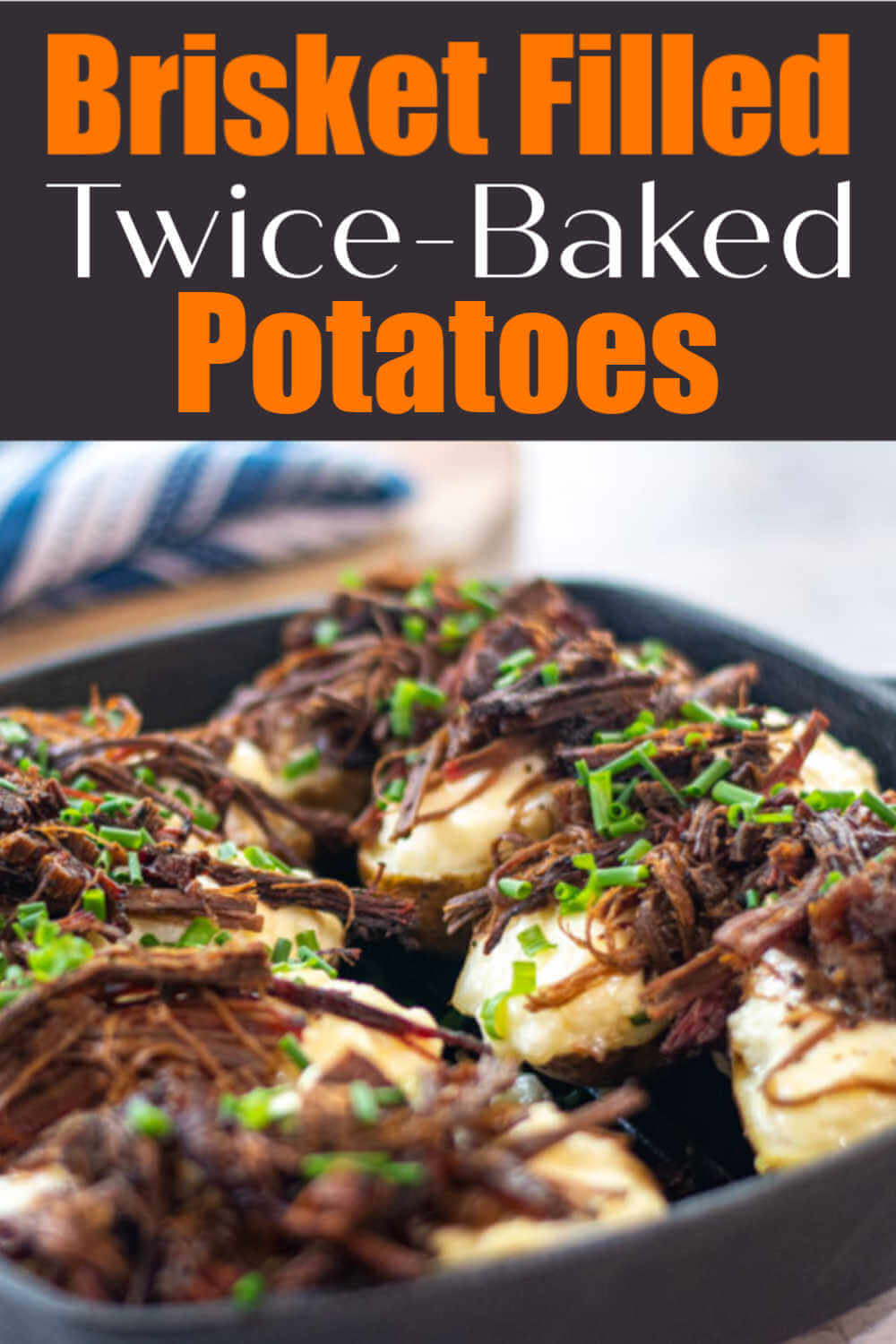 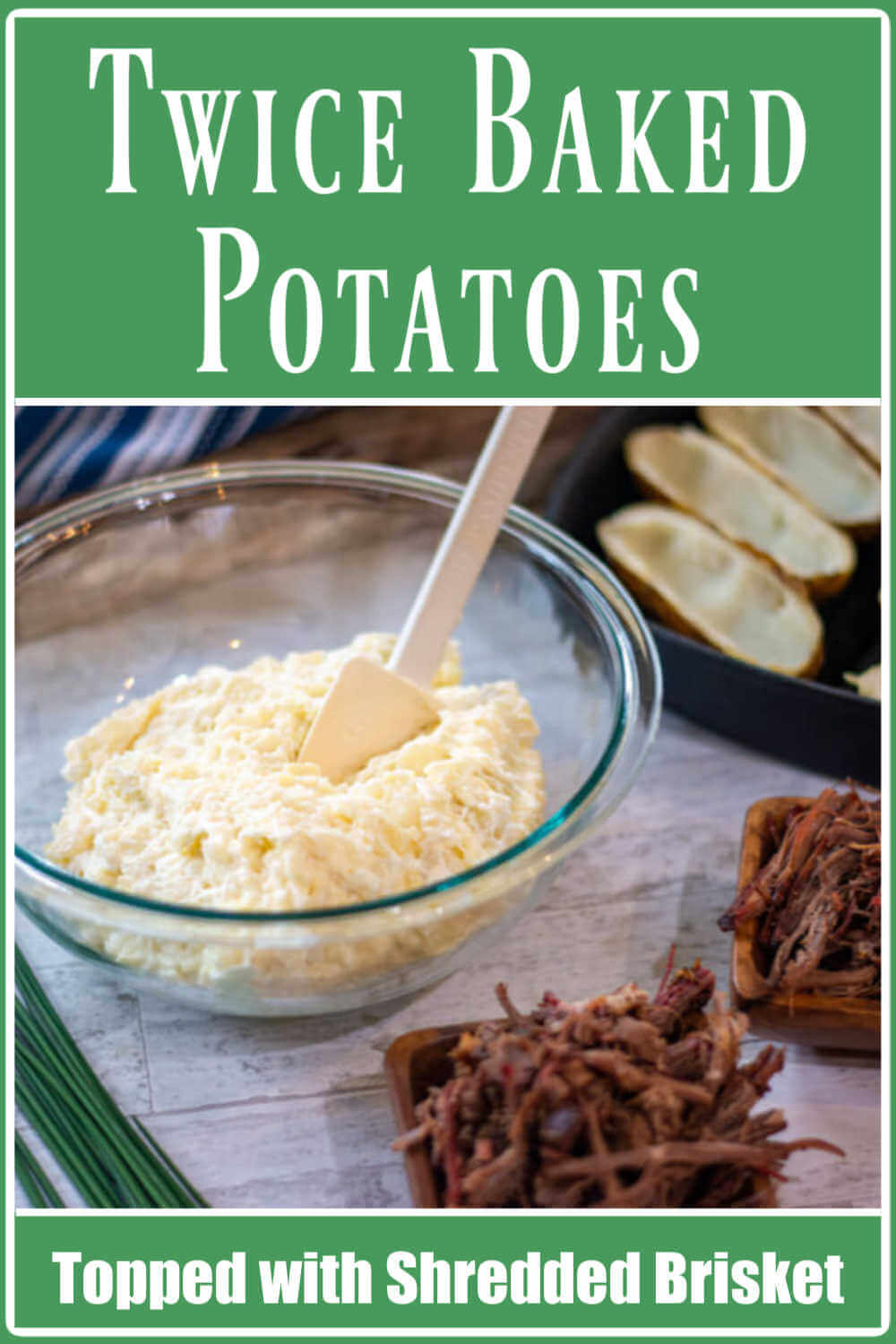