What better way to celebrate a special day than by grilling a super nice Reverse Sear Cowboy Ribeye? There are a few steps involved, and the end result will be totally worth it!

I am a huge fan of supporting our local farmers and found Long Stone Farm up in Lovettsville, Virginia that had an adorable self-serve farm stand. I dragged my son up there and found a great selection of super thick ribeyes.

We made the mistake to feed our son good cuts of meat when he was younger.  It proved to be costly, as he really does prefer a good filet or premium cut of meat.  Heck, when I was a kid, it was a big deal when it was my dad’s payday as we got to buy some red meat.  Yeah, it’s another “when I was a kid…” story.  I’m not sure why, but my son didn’t appreciate it! 😀

The reverse sear method slowly cooks a thick steak first over indirect heat, and then finishes the cook with a direct flame sear.

Step One: Season the steak with a little bit of salt and pepper. You want the flavor of the ribeye to be the star of the show, not your rubs.

Step Two: On the Big Green Egg, I added the plate setter to create an indirect heat cook.  For a gas grill, turn off the center burners. Set the temperature to about 250 degrees and added a nice, thick ribeye to the grill to slowly come up to temperature.

The goal here is to evenly cook the steak to about 10 degrees cooler than your final desired temperature.  I like my steaks medium rare (~130 degrees), so I slowly grilled the steak until the temperature was 120 degrees.

This is not the time to skimp on using a wireless meat thermometer. I wrote a review post on my favorite wireless thermometer.  I spent a lot of money on this Cowboy Ribeye, and the last thing I wanted to do was to overcook it.  (Let’s not tell my wife how much it cost, ok?)

Step Three: Now, set up the grill for direct heat at 350 degrees. It is time to create that flavorful sear. Grill each side of the ribeye for four minutes and you will have a perfectly grilled reverse sear ribeye.

Normally, for thinner cuts of meat, there is no problem with throwing it on a hot grill and sear the steak immediately.  Because the cut is thinner, by the time the outside has the nice sear, the inside will be cooked to your desired temperature.

That direct heat technique won’t work on thicker cuts of meat, though.  If you put it on direct heat, the outside will cook much faster than the inside, resulting in an overcooked outside and an undercooked inside.  Blech!

So, any time you plan to grill a thicker cut to grill, think about using the reverse searing method.  When you close the lid of the grill it will cook the steak evenly throughout and then you can get that nice sear at the end, after the inside is near the desired temperature.

I set my grill for indirect heat at 250 degrees.  It took my ribeye about 45 minutes to reach the desired temperature.  Don’t worry about the time as much as the temperature.

The term “cowboy ribeye” refers to a much thicker (up to 2”) cut that is not separated from the rib.  It is also called a bone-in prime ribeye or a Tomahawk Steak.  You may find this at a higher end grocery store’s meat department, but I have had the best luck ordering from the butcher.  Make sure that it is cut thick.

Looking for a side dish to go with this ribeye?

Steakhouse Potatoes are fun and delicious. These make you feel like you are in a great steakhouse and being treated with luxurious, rich cast iron potatoes. 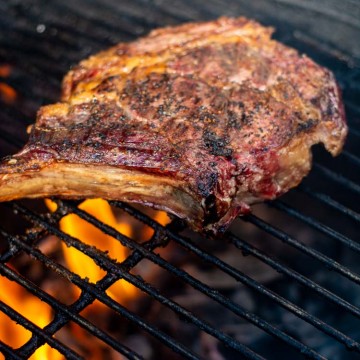 Note: Don’t worry about flipping the steak over during the indirect cooking phase.  Since the lid is closed, and it is on indirect heat, the grill is serving more as an oven to bring the steak up to temperature without overcooking the outside.
Tried this recipe?Mention @kitchenlaughter or tag #kitchenlaughter! 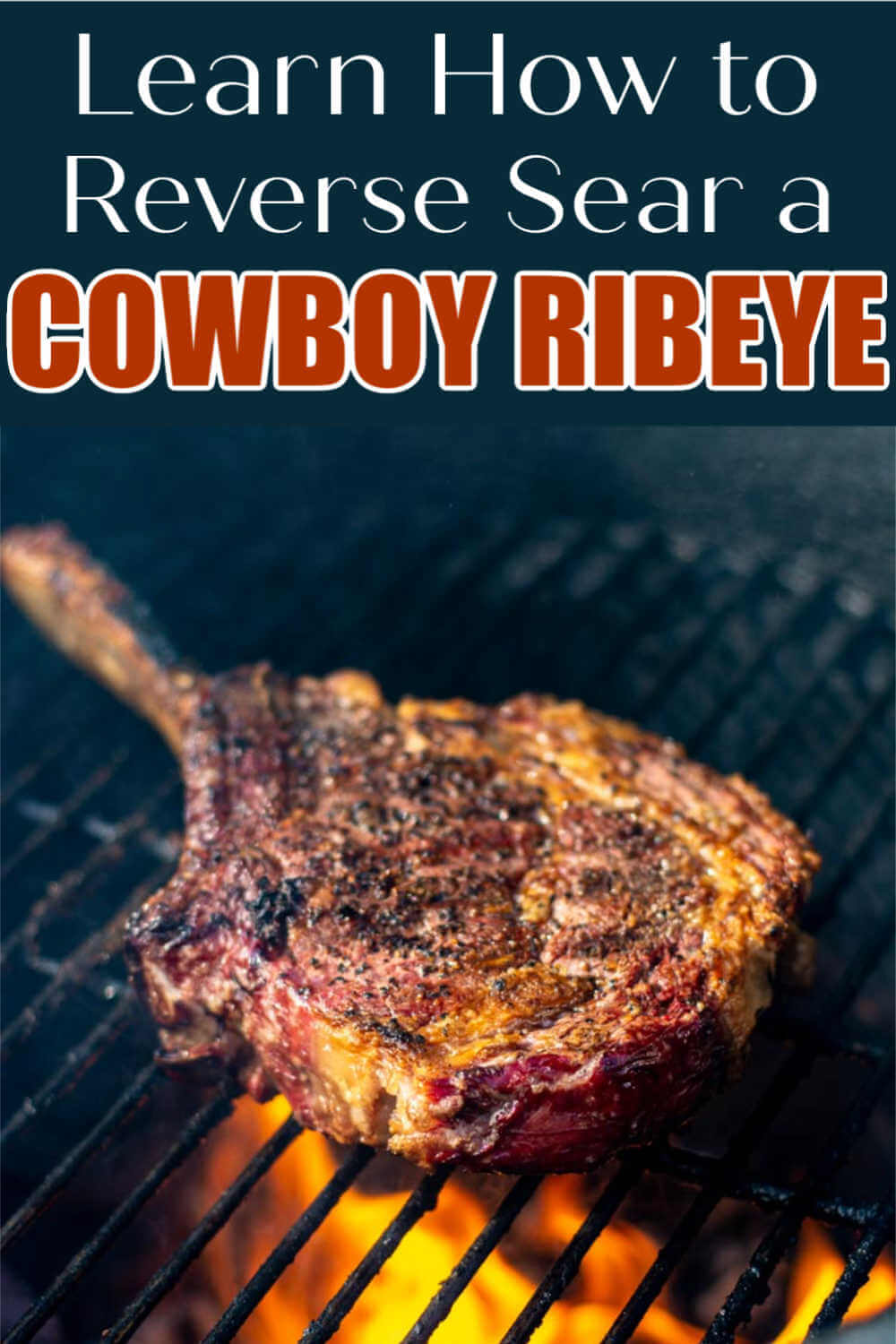