Jason’s dad makes the most incredible ribs! I remember going to his house when we were dating and his dad made these Plum Jam Ribs, and I just couldn’t get enough of them. I wanted to lick my fingers, but figured that might make the best impression with them! Ok, that sounds really wacky but I assure you, it is 100% true!

When I found out how easy they were to make, they earned a spot in our family recipe book.

Plum jam isn’t always easy to locate, but I have the most luck finding it at stores like Homegoods, TJMaxx or Marshalls. Whole Foods carries a couple of brands, and Amazon is always there for us in a pinch. The good news is that you will forget all about the hunt for the jam after you take your first bite. I promise!

If you not a huge fan of plums, substitute the plum jam with cherry, raspberry, or even blueberry jam. It is the natural sweetness that makes this a recipe for the ages.

Boil the Ribs before Grilling Them

Boil the boneless ribs until the ribs are done. This will take about 45-60 minutes. Remove all the fat and remove the ribs from the boiling water. Ribs are considered done when the internal temperature reaches 145 but they can be tough. If you keep boiling them to at least 190, the meat will fall off of the bones and be extremely tender. Don’t rush the process!

Melt a jar of plum jam with 1 tsp of ginger and brush jam over ribs. Place ribs on the grill and cook 5-10 minutes for each side. This is one of the rare times that you can “double dip” your dipping brush into the sauce many times to make sure you have this fully coated since the ribs are 100% cooked before you put them on the grill to finish them off.

Set up the grill for direct heat at 400 degrees.  Because the ribs are already cooked, this process is just to caramelize the sugars in the plum jam sauce and create that delicious glaze.  If you try to cook this at a lower temperature, you will run the risk of the ribs drying out. Keep the temperature hot and direct and you will have a melt-in-your-mouth meal!

What to serve with Plum Jam Ribs

If I had my first choices of sides for Plum Jam Ribs they would be the Steakhouse Potatoes or the Grilled Brussel Sprouts Kebabs. Both are mouthwatering and would be a hit at any cookout! 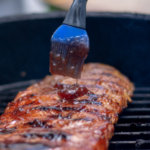